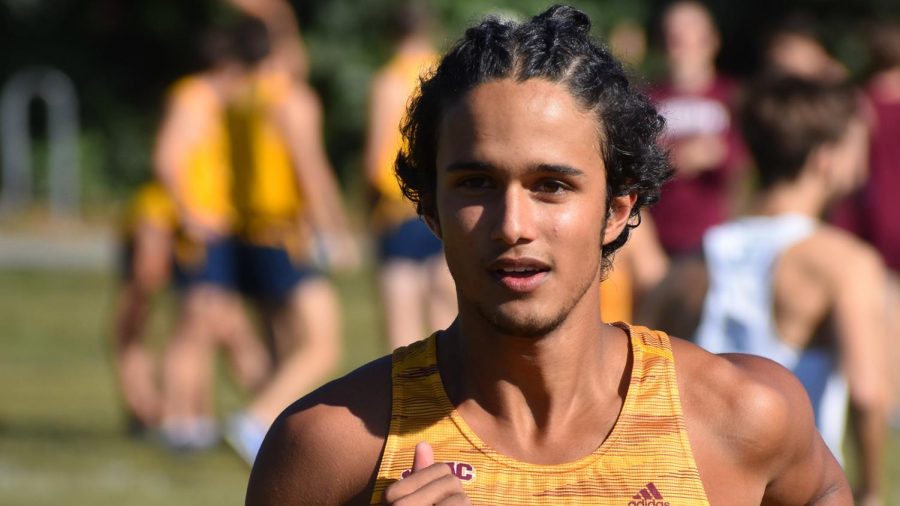 Track and field is one of those sports that requires determination and the love of challenging yourself to be faster and more consistent. It requires diligence, hard work and practice to become the best of the best. Sophomore Jonathan DeSouza absolutely loves the sport because of these elements.

DeSouza began track and field when he was in fourth grade. It was the only sport at his elementary school, so he gave it a shot. He came sixth place in his first yearrunning. It was then that he fell in love with the sport and has done it every year since.

“It’s a sport where you get out of it what you put into it,” DeSouza said.

Iona was the perfect choice for DeSouza because it felt like a family to him, a team that stuck together and supported each other throughout thick and thin.

“When I visited here, the team was so much different than any other team,” DeSouza said.

The family aspect of the team is a major part of how DeSouza performs better, he says. The act of cheering on your teammates to do better mid-race when you’re tired and panting helps with your mentality during the race.

The sophomore came from St. Marguerite d’Youville Secondary School in Ontario, Canada, with the title of Athlete of the Year. Despite such a great achievement, when DeSouza first arrived at Iona to compete at the college level, it was a whole different environment.

“College athletics is so much harder just because everyone’s at the same level as you,” DeSouza said. “I feel like in high school, you had some people that just went to skip school, but since everyone’s taking it much more serious, I love it because it’s so much more competitive.”

Competition is one of the best tools that athletes use to propel themselves to the next level. It helps DeSouza get better each race, especially when he has his brother and sophomore Joshua DeSouza on the team.

Despite all of the grit, determination and achievements behind DeSouza, adjusting to the college scene was a struggle. His first race happened this year, since he was a redshirt freshman in his first year. The difficulty proved itself in his first race for Iona.

“For track, just because [the other racers] are so much bigger and stronger, I actually fell my first race,” DeSouza said. “So, it wasn’t that good.”

It didn’t take long for the Ontario native to adapt to the scene though. He learned how to better position himself in the second race so he didn’t repeat his mistake and in his third race, a 3,000-meter race, he ended up winning with a time of 8:24.73. He didn’t expect to win either.

The plan for that race was to try and run at your own pace, according to DeSouza. When DeSouza did that, he ended up winning the race and earned the Metro Atlantic Athletic Conference Track Performer of the Meet award.

The moment of glory and triumph was opposite from DeSouza’s freshman year in the program. Being a redshirt is difficult, especially when you know you can give so much to the team but you’re forced to sit on the sidelines and watch. The desire to race definitely affected DeSouza, but that didn’t stop him from learning all he could during his time off.

“I got to see what all the older guys were doing and their habits and what they did before a race and after,” DeSouza said. “So I feel like that helped me.”

Winning performer of the meet after sitting on the sidelines for a year was a huge confidence booster for the sophomore runner. The award was more validation for how well he performed, and the confidence that came with it helps a ton when racing. That boost is valuable to DeSouza because he feels like it’s such a major part of running because it gives you the ability to execute your ideas while also believing in them.

The next step for DeSouza and the Gaels is the MAAC Championships where DeSouza will be running the 3,000-meter race once again. He hopes to continue his top performances and help bring the Gaels glory.

DeSouza plans on continuing his running career after college.