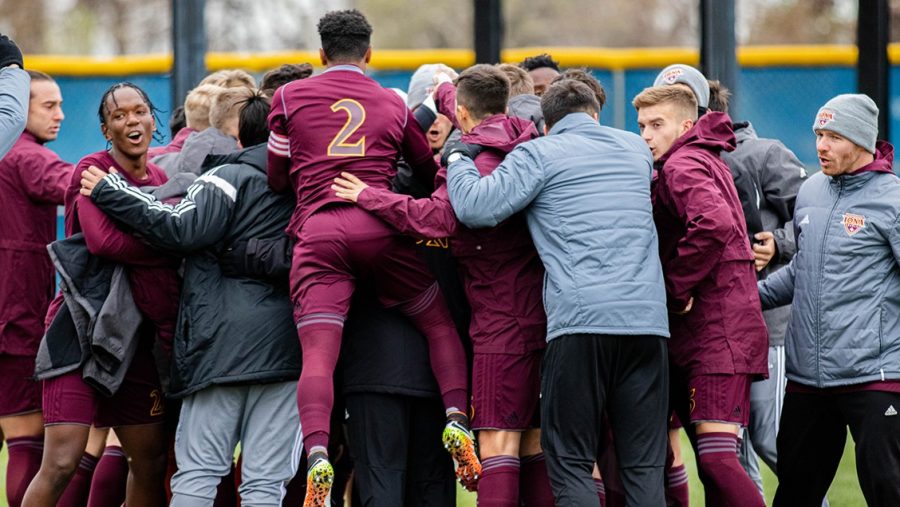 The Gaels won the Metro Atlantic Athletic Conference for the rst time in program history this season.

The Gaels advanced to the Metro Atlantic Athletic Conference championship game after beating the Quinnipiac Bobcats 2-1 in Hamden, Connecticut. The team traveled to Jersey City, New Jersey, where they matched up against the St. Peter’s Peacocks in the MAAC final.

The offense was stagnant for over a half long. The team then scored two goals in a two-minute span to even up the game at 2-2. The game went into overtime and sophomore forward Mauro Bravo scored the game’s winning goal to send the Gaels to the NCAA tournament. This win marked Iona’s first conference championship in men’s soccer program history. The tournament berth led to a matchup with the 16 seeded Maryland Terps. The Gaels lost the matchup 4-0 at College Park, Maryland.

Despite the loss, Iona reached their ultimate goal of winning a MAAC title. After decades of hopeful Gaels, this year’s team finally snagged that illusive trophy.

Head Coach James Hamilton explained the approach this season along with what the team has their eyes on.

“It’s an old cliché, but we have to take each game as it comes and continue to focus on improving every day and hopefully we can do something special,” Hamilton said.

Hamilton and company did achieve something special, which could potentially set the bar for next year’s team. The postseason experience will be with the team next year as there are only three seniors on the team that will depart. This group now knows firsthand how to win at the highest level of their conference, and could possibly carry that over into potentially winning games in the NCAA tournament.

Bravo, who had late game heroics in the championship game, scored a season high 11 goals in 2019. Junior midfielder Josh Plimpton and junior forward Lenworth Lopez contributed in a huge way with 13 combined goals to trail Bravo in second and third place on the season scoring list. Lopez stepped up this year by having two more goals this season than his previous two seasons combined.

The team’s 14-6-1 record is the program’s best since 2011, where the team had a record of 15-4-1. They reached double digit victories four times during this eight year stretch.

The Gaels showed grit when playing away from Mazzella Field this year by recording an 8-5 record, which is three games over .500. They finished up the home record with a 6-1-1 record. The unanimous goal was achieved by this team and that is something that can’t be taken away. For the next year, the Gaels have time to reflect on bringing a title to New Rochelle for the first time in schoolhistory.