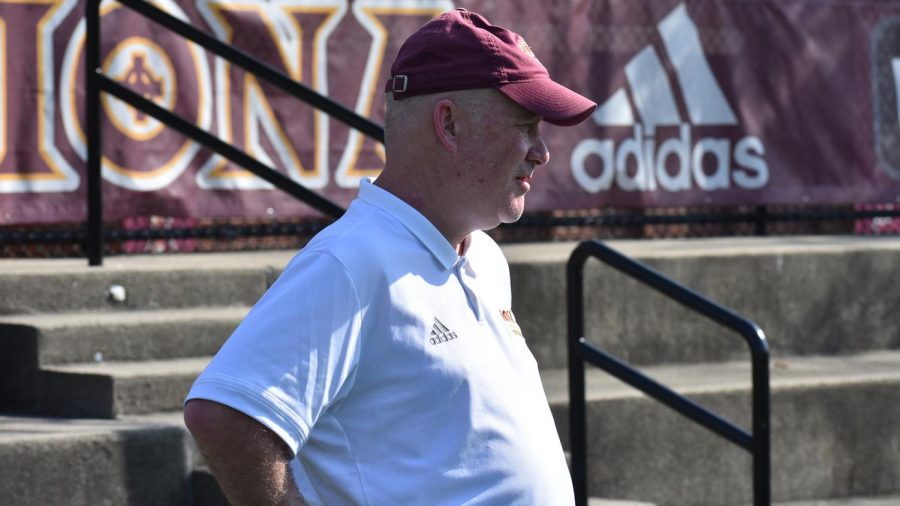 Todd Plourde had led the Gaels to four wins in the last nine games.

The Iona College women’s soccer team is close to making it to the Metro Atlantic Athletic Conference playoffs after a much better spell from the team.

The beginning of the season saw the Gaels struggling to rack up wins, as they scored one win out of eight matches. Since their 3-2 win against St. Francis Brooklyn on Sept. 18, the team has been looking better and has grown exponentially, according to head coach Todd Plourde.

The team has had on and off days, and the lack of consistency is something the team needs to work on if they plan to make it to playoffs, Plourde explained.

The score lines push his point further. The Gaels took down Saint Peter’s1-0, and then lost 0-5 to Monmouth their next game. Following that, they beat Quinnipiac 1-0 and followed it up with a 1-8 loss to Fairfield.

The defensive ability of the Gaels really shows in their matches when they’re in front. Scoring first is of the utmost priority, according to Plourde.

“When we get scored on, it’s been a trend that we haven’t been able to come back,” Plourde said. “When we get the lead, we’re tough to score on, so I think scoring first is going to be something we’re going to target for the last games.”

This first season for Plourde has gone well for him. The team has performed well and they look to go off of the high moments this season when finishing it off and going into the next, according to the head coach.

Should the Gaels clinch their spot into the playoffs, defense will be a huge factor for them to stay alive. When Iona gets in front first, their defense afterwards is difficult to get past.

Playoff season for the Gaels will mean much more than taking a loss and moving on. When it comes to the post season matches, winning is the only option, Plourde said.

“It’s do or die,” Plourde said. “We could lose a game here and there and still have a chance, now it’s do or die. In that situation, the intensity level for 90 minutes is going to be essential.”