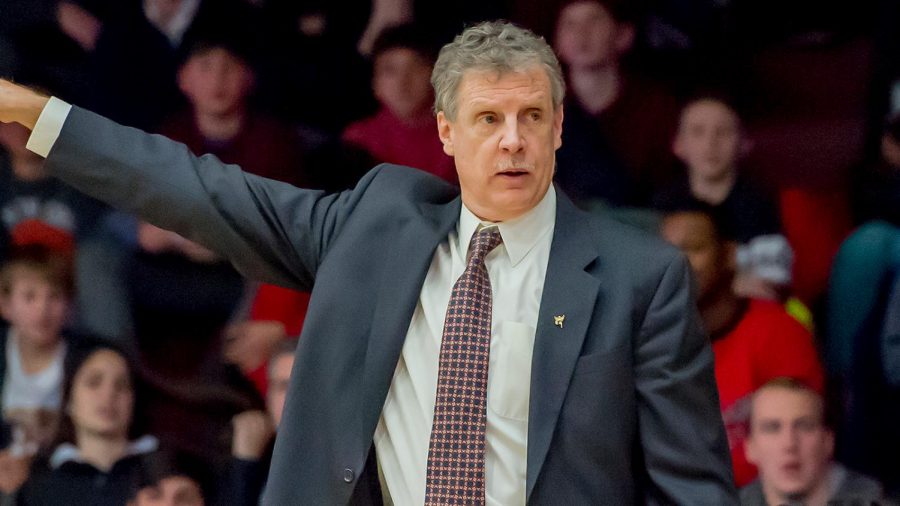 Tim Cluess has lead the Gaels to four straight Metro Atlantic Athletic Conference championships and is the only coach to have done so.

The Iona College men’s basketball team has performed well in the past four seasons and hopes to win their fifth straight Metro Atlantic Athletic Conference championship this season with the help of streamlined preparation and team experience. Having most of last year’s team helps get the team’s groove together, according to head coach Tim Cluess.

“The learning curve has been a little bit better,” Cluess said. “Some of the returning players are letting the newer players know what’s expected of them. I think they’ve done a good job there.”

The experience helps with both newcomers and returning players alike. Senior Tajuan Agee has been one of the Gaels’ most pivotal players and he has grown over the summer, both physically and mentally.

Strength and size are all a part of Agee’s growth.

“I think the end of last year he played very well,” Cluess said. “I think he’s going to take it from there and come back playing well and hopefully even take it to another level by the second half of this year.”

Agee hasn’t been the only one on the team to develop into a better player. Senior E. J. Crawford has also grown both mentally and physically since he first joined as a freshman, Cluess said. His physicalityhas improved greatly from his first year. Crawford is able to be a much bigger presence on the court, resulting in him playing smarter, more efficient basketball.

His confidence has helped his play and attitude on and off the court as well.

“He’s definitely really looking forward to being a leader on this team and helping us do some special things this year,” Cluess said.

The team play has developed over the seasons as the Gaels perform week in and week out. The tactics Iona has used in the past prove to be valuable, and Cluess plans to continue that with juniors Asante Gist and Isaiah Washington playing together, similar to how Gist and former Gael Rickey McGill played.

The tactic of putting the best players on the team on the court and moving around them will work well with this team full of talent, Cluess explained. Everyone on the team is able to play well technically and tactically, meaning anyone can be on the court and the team works well either way.

Washington’s history in New York basketball alongside his performances at the University of Minnesota made him the perfect candidate for the Gaels.

“Thankfully he wanted to come back home for various reasons,” Cluess said. “The players that had been here now and before spoke to him to about what we do here. It just was a really good fit.”

Even with such an extensive background as Washington, he, alongside other newcomers to the team, have to still get used to the coaching style of a two-time MAAC coach of the year. The task is easier said than done, according to Cluess. Many of the new players don’t know what’s expected from them at this level, and the only way for them to learn is for them to start playing games for the Gaels. Accountability for their actions is a major aspect for them to learn from and until that starts, they’re unsure what they should do.

The process of a player understanding the coaching style and play style of the team usually takes two to three months, Cluess explained. This process can’t cut corners either.

“Guys have to figure out where they fit in [and] what their roles are,” Cluess said.

The true abilities of a player show in the moments with the highest pressure. Practice is one thing, but playing in a real match is another and a player’s talents show best in those situations, according to Cluess.

The reactions of the players are important as well. How a player reacts to a situation, whether it be good or bad, helps the coach understand how that player works, which in turn helps the coach help the player.

Nonetheless, the newcomers are expected to do well and perform their best. The amount of talent on the team shows the best when the team works together, Cluess said. Any combination of players can be on the court and the team will perform well.

“I think our bench has a lot of depth,” Cluess said. “I think we have five or six guys that come off and be productive in games and give us an advantage we didn’t have last year.”

Being a part of a high-expectation program such as Iona could be daunting for freshmen Michael Ortale Jr. and Parker Weiss, and Cluess expects them to learn as much as they can about it. Understanding what Iona is all about in addition to having the willingness to be a part of it is very important for the team, Cluess explained.

“They really come with the right attitude,” Cluess said. “They’re giving all their energy every day, they’re really behind our program, they cheer when they’re on the sidelines, they play hard when they’re in the game.”

The success of Iona’s men’s basketball program is all due to the people in it, according to Cluess.

“I’m just lucky to be the guy in this position, but it’s all about the school,” Cluess said.