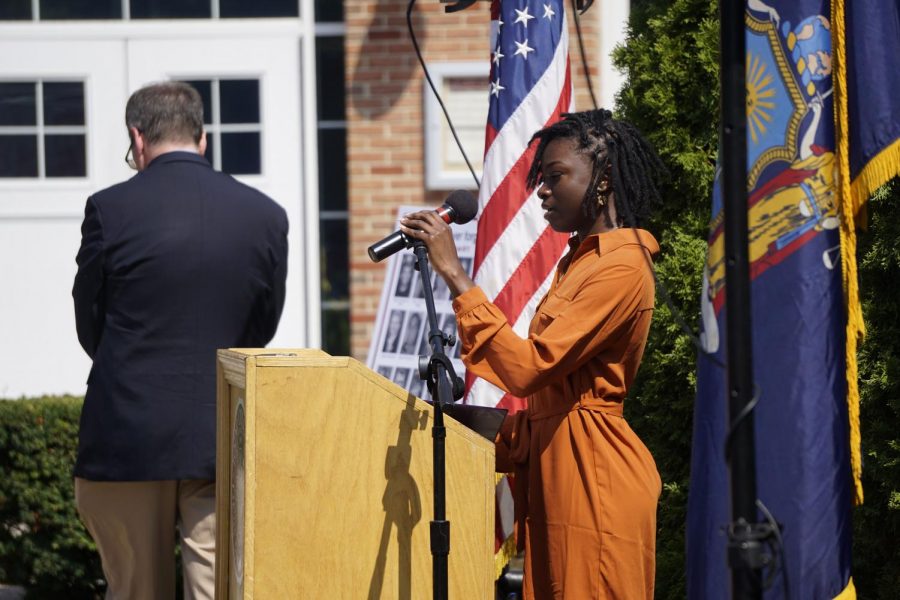 Members of the Iona College community gathered on Wednesday Sept. 11 at the Ryan Library Memorial Park for the annual commemoration of the victims of the 9/11 terrorist attack.

The gathering began with a rendition of “Amazing Grace” played by the Iona College Pipe Band. Words of welcome were then extended by the Director of the Office of Mission and Ministry, Dr. Carl Procario-Foley.

Three students then offered wisdom from different sacred traditions. Senior Atira Barber-Ellis, junior Azka Ghaffar, and sophomore Joseph Freedman each spoke about faith in the midst of the tragedy.

The Mission and Ministry Fellowship Choir followed with a performance of the “Prayer of St. Francis,” calling for hope and light instead of despair and darkness. SGA President, Campus Minister and senior Hannah McGowan, read aloud the names of the 15 Iona alumni that died in the attacks and the three alumni first responders who have since died.

After presenting the memorial wreath, President of Iona College Dr. Seamus Carey delivered a speech and spoke about how such a tragedy could bring a community closer and serve as a reminder to never take life for granted.

Senior and campus minister Martin Verendia then spoke about the National Day of Service and mentioned specific ways to volunteer in service activities through the Office of Mission and Ministry.

The tribute concluded with a prayer fromFr. Gerard Mulvey and a performance of “God Bless America” by the Iona Singers.

The following Iona College alumni served as first responders on 9/11 and have since died: