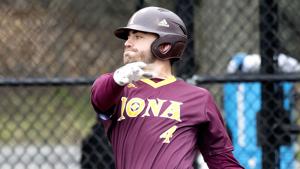 Iona won its first game of the season against Hofstra.

The Iona College baseball team (1-11) finally jumped into the win column after beating Hofstra 4-2 on March 8.

Sophomore pitcher Chris Dodrill started and pitched well. Outside of his six walks allowed, he only surrendered one earned -run over 4.2 innings pitched.

Prior to the win, the Gaels faced some tough sledding during their road trip to Tennessee and North Carolina at the start of the season.

A three-game set with East Tennessee was the first stop on the opening road trip. The season opener brought promise, as junior Stephen Hansen tossed seven innings in the 4-3 loss. Hansen surrendered one earned-run, surrendered eight hits and punched out four batters. Freshman Jake Field led the charge offensively with one hit and two RBI.

The final two games of the series against East Tennessee outscored the Gaels 28-7. Iona pitchers walked 16 batters in the two games. Fundamentally the team was sound, as the Gaels only committed four errors during the three games.

After East Tennessee, the Gaels traveled to Wilmington, North Carolina to play in the 2019 UNCW Tournament.

Iona dropped all four games in the tournament, but the team found themselves playing in some competitive games.

The Gaels played Marshall in the first game of the tournament. Iona couldn’t survive the extra-inning affair, as the Gaels lost 9-8 in 10 innings. Marshall’s Geordon Blanton knocked in the game-winning RBI on a fielder’s choice.

Field went 3-6 with three RBI. Senior outfielder Niko Switalla cranked a home run and senior Joe DeMaio tallied three hits in four at bats to go along with one RBI.

North Carolina Wilmington was Iona’s next opponent, and this was a less -competitive game as the Gaels lost 11-4. Dodrill took his lumps on the mound, as he allowed seven earned-runs in 4.1 innings pitched. The Gaels couldn’t scrap too much together with the bats, but Fran Kinsey did go 1-3 with a run scored and one RBI.

Iona then played Marshall again and the result was the same, losing 8-3 in six innings. The final game of the tournament was played against Indiana State. Iona only mustered two hits in the 10-0 loss.

Iona had one last series against UNC Asheville down in North Carolina before they went back north. However, the Gaels first win would have to wait even longer. The first game of the series was cancelled, but Iona lost the two games they did play against UNC Asheville to further their losing streak to nine games. Outscored 16-5, Iona’s bats went silent.

As Iona started back home, the team had two games postponed,. oOne against Rutgers and another against Hofstra. The team lost their first game after those postponements. It was a 9-2 loss to Fordham that extended the Gaels’ losing streak to 10 games.

Iona played against Fordham and Stony Brook before playing its first home game of the season against St. John’s on March 13. Iona will play a three-game series against George Washington starting on March 15.