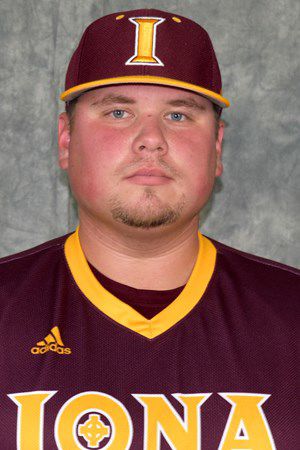 When you walk into the office of Paul Panik, you will find that it is very neat and the temperature is cool. His office serves as an ultimate reflection of himself— calm and cool, with everything in order. You will look to your left and find a white board jam packed with names. Those names? Possible recruits.

Yes, Panik is not taking this opportunity for granted.

The Iona College baseball team named Panik the program’s new head coach this offseason. Like his World Series champion brother Joe, Panik has found himself on a big stage at a young age.

Panik, a 30-year-old New York native, was suiting up for collegiate games only eight years ago at Canisius College in Buffalo. Panik has since made his rounds in various different coaching roles and this is his second go-around with the Gaels after he was a part of the 2016-17 Iona coaching staff.

Panik spoke with The Ionian about his new role as the Gaels’ head coach and how he has no plans of slowing down.

What’s it like being a head coach at a Division 1 school at such a young age?

What’s it like? I’d say it’s exciting, a little bit stressful. You know, you have a lot more responsibility than when you were an assistant. Now you literally have 35 guys in your hands and you have to deal with everything from class to practice to games.

Did you ever think you would be coming back to Iona after you were a part of the coaching staff in 2017? Does the familiarity with the players help?

The familiarity is huge because we were able to set the tone a couple years ago. I have coached the juniors and the seniors already and recruited a good chunk of the freshmen. In regards to coming back, this place has a special place in my heart. When I left it was hard for me to go. But, I knew if there was ever an opportunity I would have loved to have come back.

What takeaways have you had from your past coaching jobs that have helped you prepare for this current position?

You’re kind of making it a melting pot of all the coaches you have worked for. I’ve taken a little bit of everything from all the stops and you try to put it into a pot, stir it around and make it your own. Because, nobody has all the ideas. Everyone’s ideas are taken from somebody and molded, twisted and turned and mashed together. So, from all the other stops you take a piece from here, piece from there and kind of make it your own program.

What is your coaching philosophy? Do you emphasize a strong pitching staff, or a deep lineup?

Ideally, I would like to have a strong pitching and defensive team. I mean, if you had the perfect storm you would have everything. But, intercollegiate athletics have so much turnover, so many guys leave and come. If you can stick to the staples of pitching and defense, it will at least keep you in ball games. You can find a way to grind or scratch a couple runs across. But, if you’re giving up seven runs a game you’re not going to win slugfests every day. But every day you can win close ball games.

What do you see as the current team’s biggest strength?

It’s funny because it is two-fold. Our staff is deep and we will basically have the same core this year and next year. I don’t think we lose anybody on the mound. I know we won’t lose anybody this year. We are going to have the same group of sophomores [and] juniors. You know, guys coming back next year. I’d say it’s pitching and we have good senior leadership like Fran Kinsey [and] Sean Breen. The core senior position players and the pitching staff is probably our biggest strength.

Does being a local guy and having some recruiting history give you a leg up in the competition?

You played Division I, and were really good back in your day. Does that playing experience help you relate and coach these players better?

I think so. I think today’s coaching style has changed. You may see in the Major Leagues that guys are more players’ managers. You know, less and less of the “yell-in-your-face” guys. The playing of the game has shown a change. I graduated in 2010, and in the last eight years the coaching styles have kind of changed, kind of mellowed out. I think I have taken those playing days and I can still relate to the kids. I don’t ask my players to do anything that I haven’t done or wouldn’t be ok with doing myself.

Do you have plans to one day coach in the MLB?

Coaching in the pros is kind of a different animal. Usually, you’ve played pro ball. I would love to, but it is just a completely different animal. If I’m a bench coach for a club, I don’t get to pick my players. Here I can say, “I want that guy, I want this guy and I want that guy.” It’s a little bit different in pro ball where you kind of get stuck with a team someone else architected. I want to be the architect, I want to use my staff and I want us to round out who we want and who we like.

Rounding it out, it seems as though baseball runs in your family DNA. What is it like having a sibling who plays professional baseball and who is a World Series champ?

I think he [Joe] is a great resource. He’s a great resource for me and a great resource for our guys. It is going to be great for him to be home in the offseason and to be around and be a voice. We talk all the time. It’s funny, I shot him a couple of the recruits that we were going after and I was like “what do you think of his swing?” I bounce stuff off him all the time. But, when it comes down to it, I try not to ask him about himself. Pro ball is a whole different animal with the stress and everything. I try to not talk about him. I’ll ask him, “Oh, how was your fantasy draft?” I try to talk to him about no baseball stuff. But, I will still ask him my questions for me [and the Iona team].