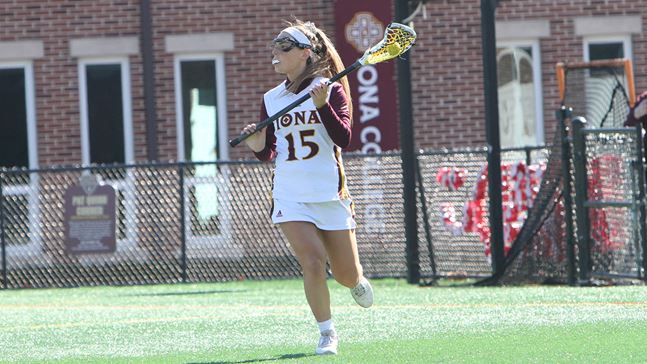 The program has never finished a season with more than nine wins, going back to 2005.

The Iona College women’s lacrosse team is past the halfway point in the 2022 season and has already made program history.

The Gaels started off the 2022 season with a loss to LaSalle University on Feb 12, but they quickly bounced back with a 12-6 victory over Long Island University on Feb. 16. This singular win tied the number of wins that the Gaels had in the 2021 season.

After the win over LIU, the team went on a 7-game win streak, setting a new program record. The streak included the home-opener win against Central Connecticut State University on Feb. 23 and a close win over Sacred Heart University on March 2.

In the 2021 season, the Metro Atlantic Athletic Conference decided to only play in-conference games, therefore the Gaels only played teams within the MAAC. Iona finished with a record of 1-11.

The Gaels have shown huge improvement during the 2022 season with a total of 147 goals only halfway through the season, which is 22 goals more than they scored during the complete 2021 season. They averaged 10.42 goals per game last season and are averaging 16.33 goals this season.

The new-found offense is led by junior captain Emily Stewart, who has scored 27 goals. The midfielder is second on the team with 16 ground balls, 37 draw controls and 10 turnovers.

Standout freshman Kira Varada is right behind Stewart with a total of 25 goals and 13 ground balls. This outstanding performance during the season so far has earned her the title of MAAC Rookie of the Week three times. The mid-fielder’s season-high of 5 goals helped the Gaels’ victory over Columbia University on March 15.

Some of these goals would not have been possible without the help of Megan Collins who leads the team with 22 assists. Also contributing to the offense is senior captain Leah Marshall who has 20 goals, 17 ground balls, 40 draw controls and 10 turnovers.

Marshall suffered a serious knee injury during a home game against the University of New Hampshire on March 19, but the team rallied around her and secured the win 18-11. Losing Marshall for almost the remainder of the season will have an effect on the offense, due to her being a top scorer, but the Gaels are confident that someone will step up in her absence.

Conference play began on the road for the Gaels in Loudonville, New York as the Gaels played against Siena College on March 26. Despite a hard-fought game, the Gaels were not able to top Siena, with the Saint Bernards scoring the winning goal with 0:03 on the clock making it a final score of 21-20.

This outstanding performance by Iona has turned heads within the conference and they hope to build off the wins from the beginning of the season as they head further into MAAC play and continue to break more program records.