Camilion, Athias lead surge against Broncs in first round matchup 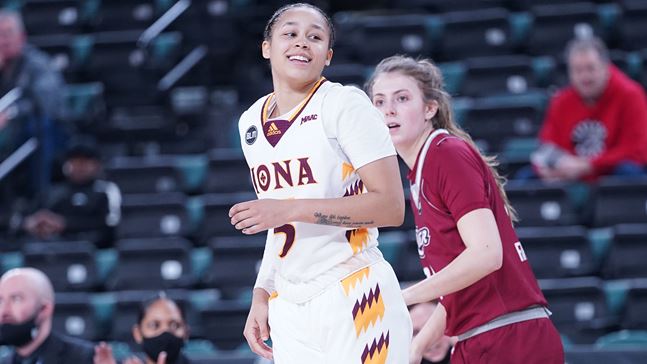 Camilion collected her third 20+ point performance this season against Rider.

The Iona College Women’s Basketball team beat the Rider Broncs on Tuesday in the opening round of the Metro Atlantic Athletic Conference (MAAC) Championships, which are taking place at Boardwalk Hall in Atlantic City, New Jersey.

The number-eight seed Gaels beat the nine seed Broncs 74-58 to advance to the quarterfinals of the MAAC tournament and set up a quarterfinal game against the top-seeded Fairfield Stags.

The Broncs led the Gaels after the first quarter 16-15, however the Gaels then outscored the Broncs 25-12 in the second quarter to lead 40-28 at the halfway point.

The final two quarters of the game were closer with the teams tying 15-15 in the third quarter and the Gaels outscoring the Broncs 19-15 in the final quarter, but the Gaels had already done the handwork in the second quarter and saw out the rest of the game to advance to the next round.

Juana Camilion, as she has done for most of the season, topped the scoring column for the Gaels with 21 points while also contributing seven rebounds and four steals. Camilion was complimented by Ketsia Athias, who finished the game with 16 rebounds, one block, four assists and 12 points.

The win is the Gaels’ first postseason MAAC Tournament victory since they beat Siena in the opening round of the 2018-2019 season.

The win moves the Gaels to a 11-15 record for the season and 8-12 in conference play. However, they face a tough task to overcome the number 1 seed, the Fairfield Stags, in the quarterfinals. The Stags finished the regular season with a 19-1 record in conference play.

If the Gaels are able to overcome the Stags, they will play either Niagara (four seed) or Siena (five seed) in the MAAC Championships semi-finals.

The Gaels finished as the eighth seed in the regular season of the MAAC, after losing their final two games of the season against Niagara (50-66) in overtime and Canisius (62-71).

Before the last two regular season games the Gaels had been on a three-game winning streak. The Gaels beat Saint Peter’s 63-44, Rider 65-58 and Monmouth 69-65 which secured them the eighth seed for the MAAC Tournament.

Juana Camilion was also named in the MAAC All-Second Team after her performances for the maroon and gold during the regular season.