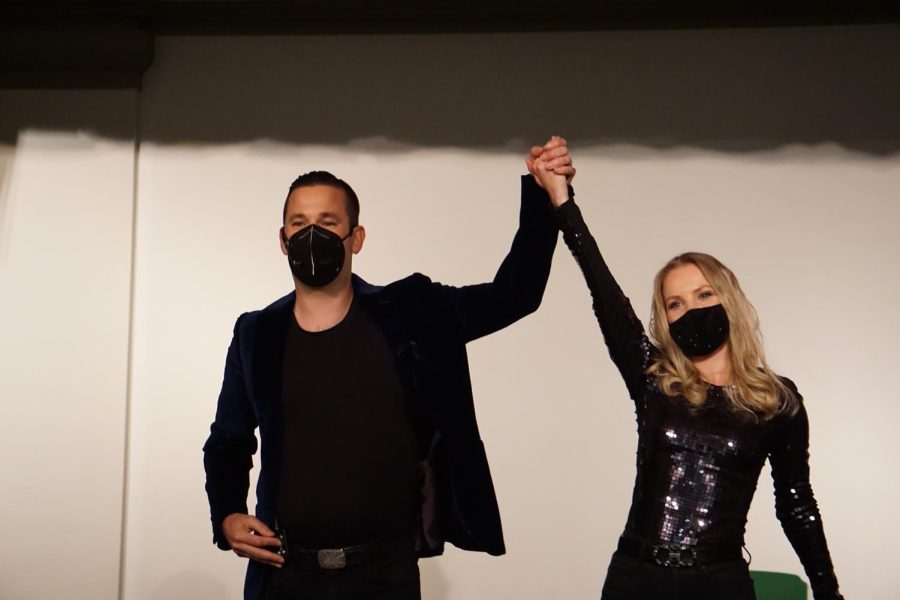 Illusionists David and Antonia sparked amazement and confusion with their mind boggling performance.

Iona hosted illusionists David and Antonia Hall at Romita Auditorium on Jan. 18. The show began at 8pm as part of the semiannual Weeks of Welcome events, a series of activities that celebrate the new academic year as Gaels resettle back into their routine.

The event provided various magic tricks and illusions. One such trick was pulling a dollar bill that was signed by a student to appear inside a lemon. Another one was the illusionists predicting what color a pair of dice was going to be.

David and Antonia started the night with a simple request from the audience by telling them to generate a large number. Random students were selected to pick numbers so they can all be calculated together. The first student was instructed to pick a number one through 10, which was then multiplied by 2. The next student was called upon to add the number eight to the number. The number was subtracted and divided a few more times. After calling out this final number, David reappeared with a sign from the back that was made before the show started. The sign appeared to say the word elephant in permanent marker. Having no prior knowledge of what numbers the audience was going to pick, Antonia stepped aside revealing that the elephant did in fact match that number.  For example, 1-A, 2-B, 3-C, and so on were revealed to be accurate, demonstrating that their expertise in guessing what the students would create.

Another performance included David asking students to watch him with his magical rope, an act that he said took him a long time to learn. Accomplishing his goal, David quickly separated the rope into two pieces and then put it back together without any effort.

To wrap up the night, the duo performed a two-step performance. David and Antonia picked two students to volunteer and help.  One student was told to pick a phone book and turn to a random page, before returning to their chair. David had handed out eight envelopes to the people volunteering. He also had two chalkboards and wiped them clean to make sure nothing was written. They then called upon the audience to create the narrative of how the students with the envelopes should stand in a line. David communicated through the power of his mind to ask Antonia how the students would stand. Antonia predicted correctly and held the chalkboard with her answers, which were face down on top of each other. To confirm this, each student called out their number from the envelopes, which were the same number from the beginning. The best part of this trick was to check on that phone book, realizing that the first phone number in that book is the one the students created in the beginning.

The illusionists David and Antonia Hall believe that nothing is impossible and they had plenty of Iona’s students intrigued and wanting more. After all was said and done, many students were left in awe wondering just how they did it.