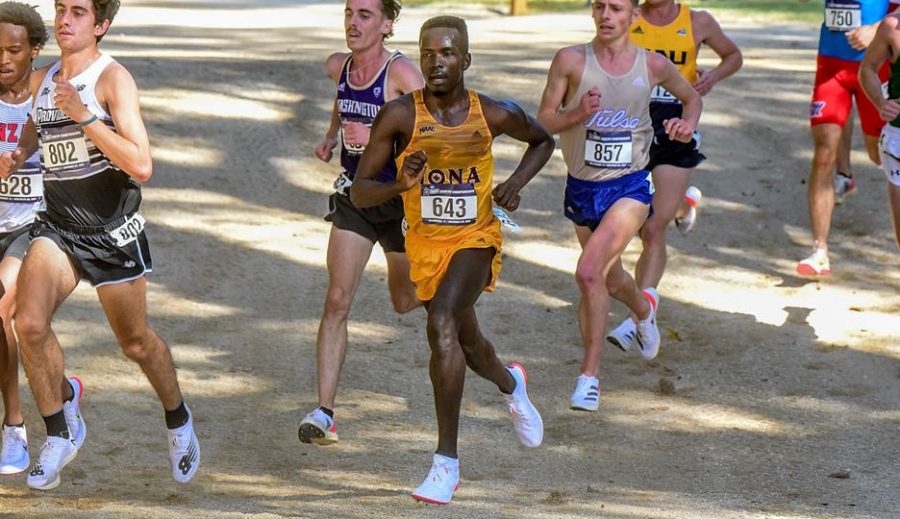 El-Sandali was named the MAAC’s Most Oustanding Track Performer in 2021.

From Sudan to Lebanon to Canada, Ehab El-Sandali has made a lasting mark on a storied Iona sports program right here in New Rochelle.

Iona’s success on the cross-country course is evident in their six top-five finishes in the NCAA Championship in addition to their eight NCAA Northeast Regional championships. Even though El-Sandali was recruited to schools like Syracuse, Wisconsin and Virginia, his final selection stands as a testament to the program’s quality.

Over the course of his career at Iona, El-Sandali has only added to that existing success.

El-Sandali was born in Sudan before moving to Lebanon when he was three years old. At the age of six, he came to North America and made his home in Toronto, Ontario.

Making friends off the bat was difficult for El-Sandali, due mostly in part to the language barrier and being in a new and foreign country. When he started playing sports in third grade, he started to form relationships as well. Sports gave him the ability to connect with the environment he now found himself in.

Basketball was the cross-country standout’s first passion. It was during a tryout for a basketball club in his freshman year that his coaches recognized his running ability. The players had to run 10 laps on the track to warmup. El-Sandali ran circles around everyone during the exercise and was told he should think about running for the school team.

After capturing the City Champion 3000-meter title in his first season without any prolonged, formal training, it’s safe to say that this advice paid off. El-Sandali would quit basketball in his sophomore year and would be named City Champion for the next three years in both cross-country and track & field.

The Sudan native admits that he did not fall in love with running right away because of how grueling of a sport it was. What was apparent to El-Sandali, though, was that he had a natural ability that he could excel with.

““You realize you only have the opportunity to run for so long,” El-Sandali said. “I would regret it if I didn’t take it up.”

Sometime during this span, El-Sandali found his true love for the sport, no matter how difficult the training and preparation was.

“It’s a lot more failures than success, but those days that you have a good race, it’s so fruitful,” El-Sandali said. “I live for those moments.”

El-Sandali would collect many more accolades in his high school career that would ultimately garner attention from many recruiters and various big-market programs. Yet, it was the Iona campus that he would eventually bring his talents to.

Five years ago, El-Sandali viewed Iona as a place that would give him all the resources he would need. Today, the runner has no doubts about his decision and takes pride in the opportunity to show out for the Maroon and Gold.

Most importantly, El-Sandali wants to challenge the stigma around athletics at smaller schools.

“I’m here to prove that smaller schools can do it too. I like having that underdog role,” El-Sandali said. “I want to be a part of something special here and give the smaller schools a chance.”

El-Sandali did not waste any time in getting acquainted with his new league and new college. His rookie year at Iona saw him place eighth overall in the 8k Metro Atlantic Athletic Conference Cross-Country Championship race.

He also won the 1,500-meter race at the Metropolitan Championships and was named Rookie of the Meet at the MAAC Indoor Track and Field Championship.

He was able to place in the top 100 of finishers at the 2018 NCAA Cross-Country Championships in his sophomore season while winning the 10k at the MAAC Outdoor Track and Field Championships.

Most recently, El-Sandali was named an NCAA Cross-Country All-American for the first time in his career after he finished 25th overall at this year’s championship.

The distance runner commented on how difficult the competition at nationals is, and how near-perfection is required in order to succeed in the race.

“it’s probably the world’s best U23 championship” El-Sandali said. “You got to be on or you’re going to get chewed up.”

This adversity has only pushed the graduate student to work harder as he prepares for his next steps after Iona, but El-Sandali remained firm in his commitment to taking care of business in the upcoming indoor and outdoor track seasons.

“I want to be the best,” El-Sandali said.

El-Sandali has high aspirations for his career after college, including making the World Championships team by summer 2022 and participating in the 2024 Paris Olympic Games.

While these goals seemingly carry a magnitude of pressure, El-Sandali says that he is going to let his performance this upcoming season speak for itself.