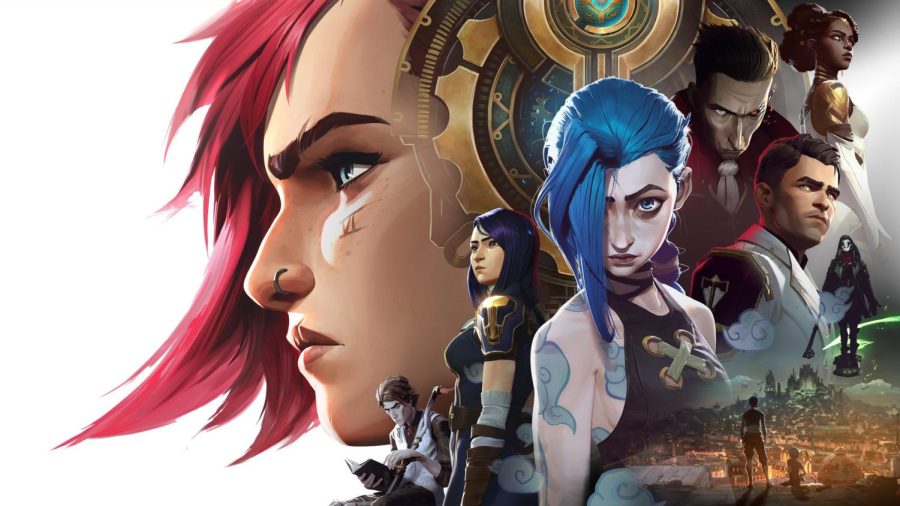 Arcane impresses with a videogame adaptation that both fans and non-fans can enjoy.

While Netflix’s “Arcane” may be based on the massively popular online game “League of Legends,” the show goes beyond being another run-of-the-mill videogame adaptation. Many  were initially led to believe that the nine-episode-long animated series would be nothing more than a fan-service filled, easy cash grab, but in a surprise twist, Arcane features an incredibly well-written, emotional storyline that’s enthralling even without any prior knowledge of the source material.

The core of “Arcane’s” story focuses on two sisters Vi (Hailee Steinfeld) and Jinx (Ella Purnell), both of whom grow up within the city of Zaun, a desolate society rampant with violence that struggles in comparison to the city of Piltover where nobles and the affluent thrive in luxury and progress. Tensions between Piltover and Zaun are high and as the story follows the two nations that are growing increasingly closer to starting war, the two sisters who were once close tragically become estranged and find themselves on opposing sides, both struggling with the reality of how their relationship and the world around them has changed.

“Arcane” impressively takes one of the various settings and several characters from “League of Legends’s” universe and uses them to tell an emotional and brilliantly constructed narrative of duality and sacrifice. Immense care and thought has gone into the writing of the show in order to make the wide cast of characters feel and act like genuine people and for both the cities of Zaun and Piltover to feel like real, lived-in places. Each character has their own story that interweaves with each other with lasting effects and “Arcane” impressively never feels like it spends too much time in one place and gives each character room to breathe and be fleshed out.

The theme of duality is poignant throughout nearly every aspect of “Arcane” and leads to genuinely emotional and engaging moments. “Arcane’s” story has no objectively “right” or “wrong” side, which leads to heart-wrenching moments as characters are forced into conflicts that challenge their ideals and their relationships. Vi and Jinx’s story of sisters to strangers stands as a pillar for this theme, but several characters follow this as well, such as the stories of scientists Viktor (Harry Lloyd) and Jayce (Kevin Alejandro) who both want to help society with their research but struggle to see eye-to-eye because of their backgrounds from the differing nations. Just when a character may seem irredeemable, “Arcane” manages to find a way to believably humanize and the story beats that follow from this will leave audiences ruminating on the emotionally poignant moments long after watching the show.

“Arcane’s” animation is stunning with a unique art style that brings the world of “League of Legends” to life in a way that feels vibrant and dynamic. The animation helps elevate the strong story even more with beautiful imagery during emotional beats and fluidly well-choreographed action scenes. The show’s soundtrack is incredibly memorable as well with songs from a variety of artists such as Imagine Dragons, JID, Bea Miller and others that compliment both the exciting and melancholic moments of the show.

“Arcane” is easily one of Netflix’s strongest animated series, and its story is so strongly written that the show is equally enjoyable both for “League of Legends” fans and viewers who have never heard of the game before. With a second season having been announced after a massive cliffhanger, “Arcane” is being set up to become one of Netflix’s most exciting original series.