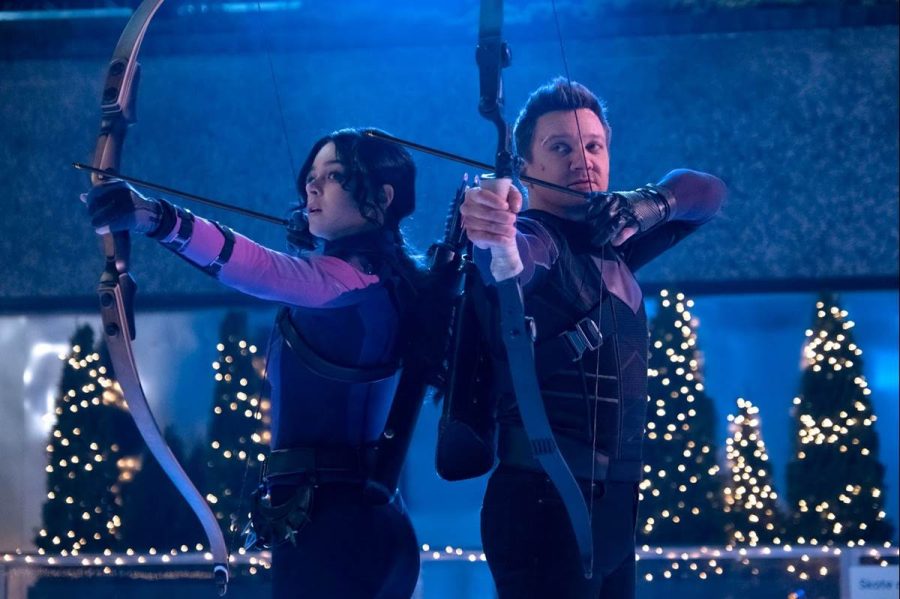 Marvel’s new “Hawkeye” mini-series gives Marvel fans an early Christmas present. The series, starring Jeremy Renner and Hailee Steinfeld, was released on Nov. 24 and will conclude on Dec. 22. There will be a total of six episodes with each being 50-minutes long.

Although that may sound like a short lifespan for a miniseries, the show does a great job in showcasing Hawkeye’s life past “Avengers: Endgame.” Many fans were left wondering why Hawkeye didn’t die in Endgame when it seemed like his death was inevitable. After Thanos’ snap which killed those close to Hawkeye and the death of his best friend Black Widow, fans wanted to know what was left for the superhero. In the miniseries, Hawkeye is spending the holiday season with his children, attempting to live a quiet life while reuniting with his wife. Life for Hawkeye returns to its hectic nature after the young, aspiring hero Kate Bishop takes on the Hawkeye name wanting to be like her idol, leading to the two Hawkeyes teaming up.

The casting of the miniseries was flawlessly done by Marvel. Renner once again kills his role as Hawkeye, and many fans are happy the character is getting more screen-time. It is unclear whether this will serve as the passing of the baton from one Hawkeye to another. If that is the case, fans can be assured that the next Hawkeye, played by Hailee Steinfeld, will be in good hands. Hailee Steinfeld gives a great performance as Kate Bishop and is most likely going to be a mainstay in the next phase of the MCU. This casting serves as a breakout role for Steinfeld who has always been a big fan of Marvel. Steinfeld previously voiced Spider-Gwen in the hit animated movie “Spider-Man: Into the Spider-Verse.” Steinfeld herself said that she grew up watching Marvel films with her favorite being “Endgame,” which makes her casting of a character after the hit movie even more likable.

Marvel did a great job with the timing of the series as having a Christmas themed miniseries around the holiday season gives the show a warm, cozy feeling. As for students who are wrapping up school soon and set to go on break, this miniseries will help get rid of any nerves one may have. It’s another feel-good series from Marvel. On the topic of feel-good releases from Marvel, Phase Four has been a success so far. Fans have gushed over the releases of “Shang-Chi,” “The Eternals,” and most recently, “Spider-Man: No Way Home.” “Loki” and “WandaVision” were television shows that had fans obsessed. “Hawkeye” is now a part of that group and when the six episodes conclude, fans will be left wanting more as they do with every Marvel release. The future of the MCU and the character of Hawkeye is unknown for now with many questions left to be answered and many questions yet to be raised. With MCU storylines lined up for the next decade, Marvel fans will be in for even more treats. Hawkeye is the latest series that fans should savor as Disney+ has yet another hit on their hands.