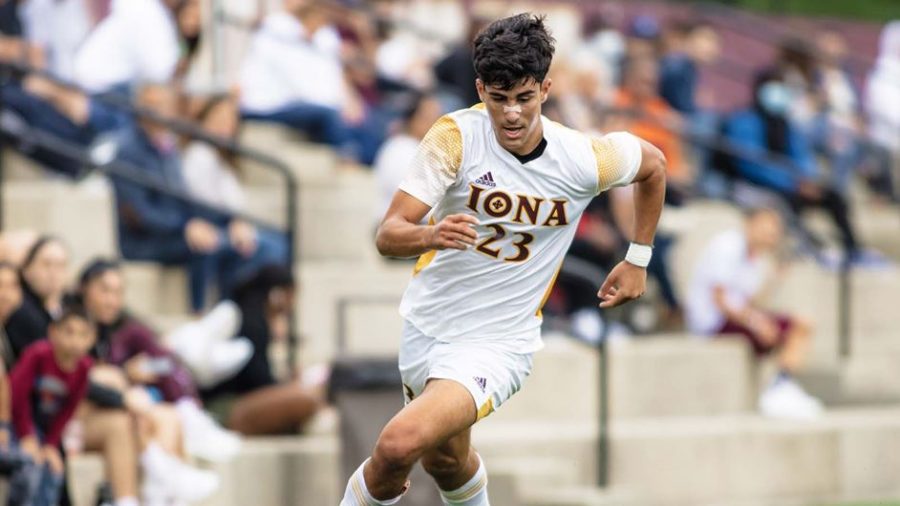 Azzam Ruiz led the MAAC in shots on goal with 48 while the next closest eligible player had 36.

Growing up in Spain, all Camil Azzam Ruiz wanted to do was to play soccer. He began playing fútbol, as he calls it, when he was first living in the south of Spain at age three. From there, Azzam Ruiz continued to play soccer throughout his time of moving from one part of Spain to another and playing for clubs such as Real Madrid.

When time came for college, Azzam Ruiz had to decide what he wanted his future to look like. Ultimately, he decided that he wanted to play collegiate soccer and hopefully become a professional player after graduation.

Upon having very good stats at the end of the season, many told him that the best path to a possible professional contract would be to transfer to an NCAA Division I school. From there, Iona College Head Coach James Hamilton contacted Azzam Ruiz, asking him to come play at Iona.

“I had a good friend here, and from talking with him a lot, he told me that this would be a perfect environment for me,” Azzam Ruiz said. “The coaching staff was really good, the college was nice and the whole Iona family was really good, so I gladly decided to come here.”

Azzam Ruiz’s sophomore season, and his first season at Iona College, was disrupted by the global pandemic. The team was not able to play their regular season and were only able to play eight games beginning in mid-March. From there, him and his teammates anxiously awaited the start of the 2021 season.

The 2021 campaign did not culminate in the result they wanted, with even Azzam Ruiz saying that it “just wasn’t our year.”

The team lost their first three games against Vermont, Navy and University of Maryland Baltimore County and tied with Holy Cross in their fourth game. The turning point for the Gaels was in their fifth regular season game against New Jersey Institute, which was a significant 5-2 win for the team. Azzam Ruiz scored two of those five goals and had one assist.

The season ended for the Gaels with six wins, nine losses and two ties. After losing their last three games, the team was not eligible to play in the Metro Atlantic Athletic Conference post-regular season playoffs.

When asked about his personal performance throughout the season, Azzam Ruiz was quite honest in saying that he was not satisfied with how he played. He pointed out that in his game against NJIT he felt quite satisfied, but his play was not consistent enough throughout the season for his liking. From an outsider’s perspective, though, Azzam Ruiz performed exceptionally well.

He was named MAAC Offensive Player of the Week in late October after Iona’s 3-1 win over Siena College on Oct. 20. Azzam Ruiz ended the season with an Iona career high of ten goals and three assists and was voted to the 2021 All-MAAC Second Team.

Going into his senior season, the standout junior hopes to finally do what he came to Iona to do: have a stellar season and go onto the MAAC championships. Upon graduation in 2023, he hopes to finally be able to play professional soccer.

With team chemistry steadily increasing, and the Gaels improving every day throughout the off season, Azzam Ruiz is confident in himself and his teammates going into next fall.

“I’m sure next year is going to be our year,” Azzam Ruiz said.