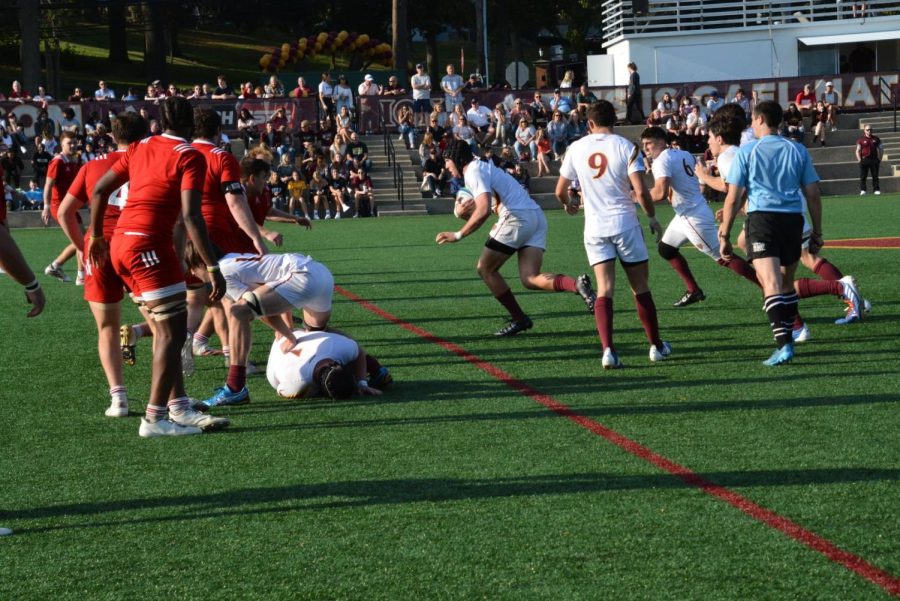 Despite the lopsided loss, Iona has outscored opponents 258-147 through six games this season.

The Iona rugby team fell 55-14 to Indiana in this year’s homecoming game on Oct. 16 at Mazzella Field.

The seats were filled with  faithful Gaels on a sunny afternoon as Iona faced off against Indiana, seeking to improve upon their undefeated record on the season. The game highlighted a weekend of homecoming festivities at Iona, the college’s first homecoming weekend since 2019 due to the COVID-19 pandemic.

Iona rugby looked to carry the homecoming excitement around campus with them into this game. Fans of all ages came out to support the team including alumni of Iona, parents of students and students currently attending Iona.

Former Iona rugby player Ray Marten was honored before the game with a ceremonious induction into the Iona College Rugby Hall of Fame. Marten played for the team from 1981 to 1984.

Indiana took control of the game from the very start, building up a large early lead on Iona. The Hoosiers solid tackling and speed on the edge made it difficult for the Gaels’ runners to create much space and break off any long runs. This proved to set the tempo for the Hoosiers for the rest of the match.

The Gaels allowed eight different Hoosier players to score in the match.

The opponent’s ball movement and heads-up play made it difficult for the Iona defense to force turnovers. Takeaways are vital to a team’s success in rugby because they force the opposition to switch quickly from attacking to defending. Iona was unable to do this consistently enough in the match.

Iona’s Conor Byrnes stood out as one of the team’s few bright spots in the match. Byrnes, who is in the middle of a standout season for the Gaels, played solid defense throughout the game while also punching in both of the team’s tries.

The Gaels entered the contest with an undefeated 4-0 record as one of the top teams in the National Collegiate Rugby Liberty Conference. The Hoosiers were touted as the top rugby club from the Big Ten Conference.

Both teams were nationally ranked as top 25-teams, with Iona being #20 in the country and Indiana sitting at #10, according to the Goff Rugby Report power rankings.