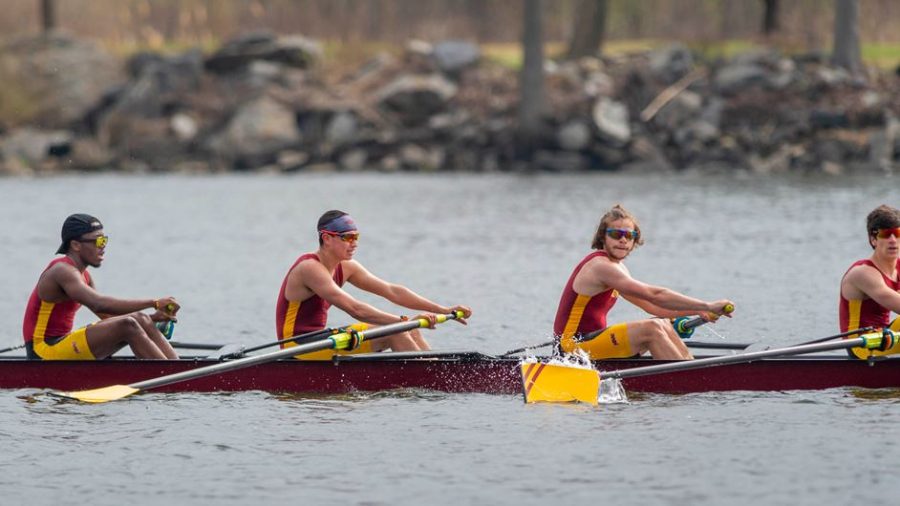 Iona will travel to Cambridge, MA for the Head of the Charles regatta, known as the largest regatta in the world with over 800 clubs, on Oct. 23.

The Iona men’s and women’s rowing teams got their fall season started at the Head of the Housatonic meet on the Housatonic River in Derby, Conn. on Oct. 9.

The Gaels took part in three races at the school’s first ever appearance at the meet where they faced off against teams from Manhattan College, Trinity College, Lehigh University and the U.S Merchant Marine Academy among others.

Sophomore Oliver Sanchez led the way for Iona in the men’s single race. He finished in 10th with a time of 19:04 in a field made up of former and current national rowing champions.

The women were able to secure a top-half finish in the women’s 4+ race as they crossed the finish line with a time of 19:19. The boat was comprised of three freshmen rowers in their first collegiate race in Grace Barber, Layne McDonald and coxswain Cara Donnelly. Senior rower Erin O’Brien and junior rower Gwyneth Sauter added some experience to the young group and helped them grab ninth place.

Seniors Francis Acolitse and John Swanson, along with sophomore Hayden Skigen and junior Nickolas Karpov led the men’s 4+ boat to a seventh-place spot with a time of 17:31, earning Iona rowing its second top-half finish of the day.

The Gaels have two regattas left on their fall season schedule, the next being the storied Head of the Charles regatta on Oct. 23. Their season concludes when they host the Fall Metropolitan Championships at their home waters off Glen Island Park in New Rochelle.

The shorter fall season gives rowers the opportunity to build up their strength and endurance heading into their winter works. Races in the fall are often much longer than regular races in the spring.

Due to the COVID-19 pandemic, the team was unable to get in the water because of various health concerns in the fall of 2020. To make up for this lack of actual rowing, the staff had to find new ways to keep the team-motivated throughout the fall conditioning period.
One way that the coaches kept the team busy was by having the men and women train for and run a half-marathon. Even now that the team is practicing on the water this fall, they have still kept up on their cardiovascular training on foot and have their eyes on another half-marathon in mid-November, according to senior rower Jacob Tivnan.

Coaches also challenged their athletes to a 1-million-meter goal over the summer. Rowers on the team tried to meet the goal through running, rowing and biking throughout their offseason training.

Iona rowing has forced itself into the public eye on campus over the last few seasons as they continue to improve year after year, and rowers like Acolitse are proud of the recognition that the sport is starting to receive at the college.

“People did not always realize how hard of a sport it is,” Acolitse said in a phone interview. “Now, people are seeing how much work rowers put into the sport.”

Acolitse’s recent appointment as president of the Student Athlete Advisory Committee is a testament to that recognition, as the Iona rowing program continues to grow both in skill and success.