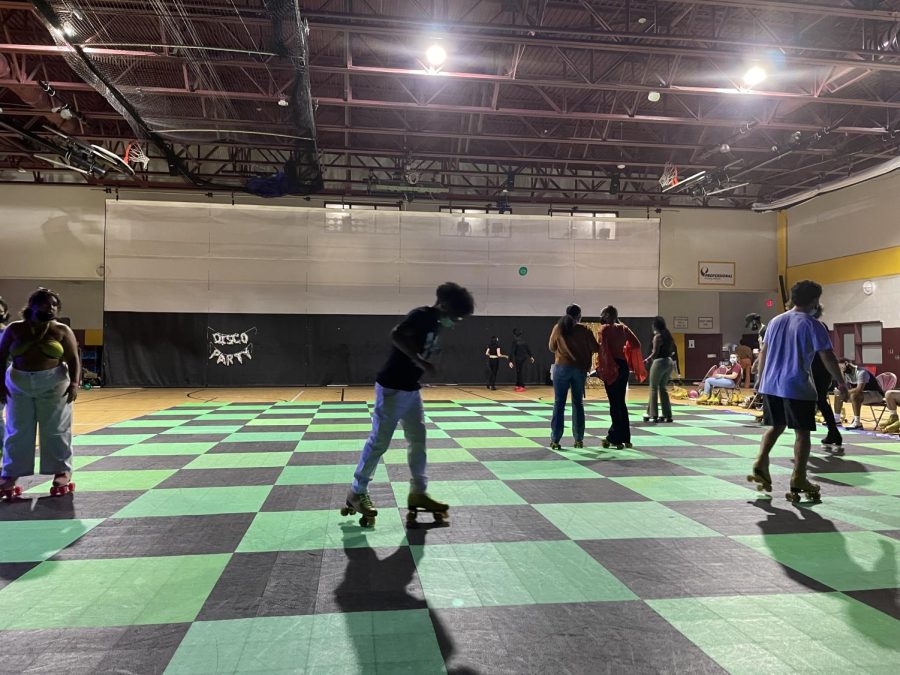 Mulcahy Gym was transformed into a 70s roller disco on Oct. 16 through the efforts of the Center for Student Engagement, the Fashion Club, Delta Upsilon and Phi Gamma Chi. As the second night of Homecoming came to a close, Gaels had the opportunity to skate the night away.

Those who were not tired after a long day of fun were invited to come with their fellow Gaels or other friends to continue the momentum. There was a $5 entrance fee for Iona students and a $10 fee for registered guests. After registering and scanning the QR code, students were allowed in. The next step was getting the skates with bright neon pink and green shoelaces that perfectly matched the theme.

The gym had a skating mat that gave party goers enough space to bust out their best 70s dance moves. Those who were more experienced skaters did twirls and spins, while others were like Bambi taking their first steps. Learning how to skate is like learning how to walk – you have to balance yourself and take baby steps. It can be scary when you begin rolling uncontrollably, fearing that you will not be the only one you are taking down. Luckily, since Gaels “fight the good fight,” there was a lot of handholding that kept the falling to a minimum. After a while, those initial jitters were soon gone as the new skaters sang along to silly pop songs with their friends.

If students wanted to take a memento from the night, there were several photo ops. The most popular was the photobooth. Friend groups crowded around the photobooth planning the coordinated poses they would like to do.

A staple of many Iona College events is the assortment of food trucks. For the 70s Roller Skate & Food Trucks Party, sophomore Toni Fullerton thought the delicious ice cream was the treat of the night.

The Fashion Club conducted a fashion contest for the grooviest outfits. When thinking of the fashion of 70s the first things most people think are flashy sequins, platform shoes and wide-legged pants. However, the decade had so much to offer from glam rockers like David Bowie, to the hippie movement and disco. Recently, some trends are coming back such as fur coats, bright clothing and makeup as well as fun prints. Some lucky few who were dressed to impress were entered into the contest to win awesome prizes. Near the end of the night, the winners were chosen by who received the most applause. The loud music and clapping made it difficult to distinguish who obtained the majority of the applause but eventually the winners were announced to many cheers. First place won NBA tickets, second place won a spa day and third place won a gift card of their choice.

The party ended at midnight. The lights were dimmed as everyone began to return their skates. Friends wished everyone a safe ride or walk home wishing that the night could have lasted a little longer.

If you missed the 70s Roller Skate & Food Trucks Party, there is always next year, but until then you have plenty of time to learn how to skate.