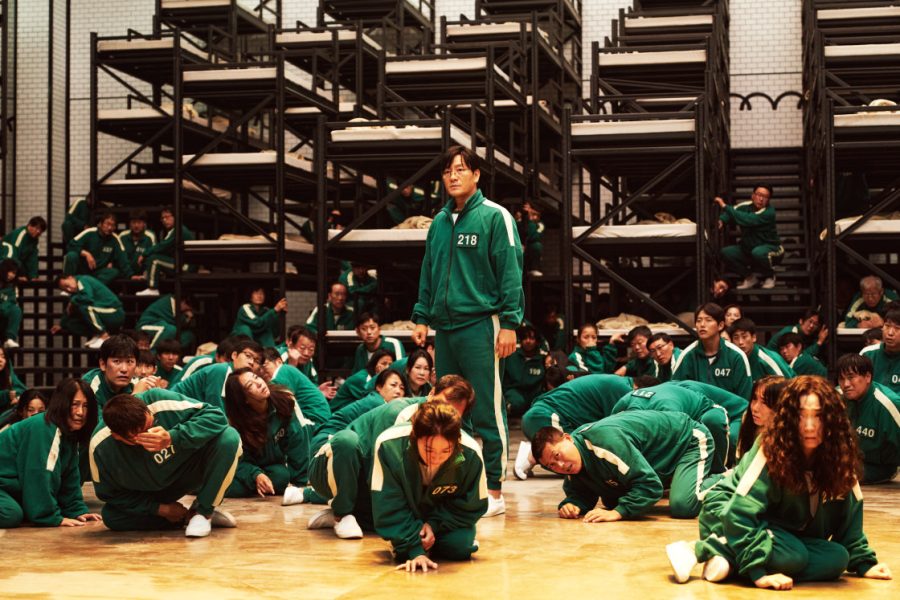 The dark and twisted plot of 'Squid Game' immediately captures the attention of viewers.

I’m usually not one to fall prey to pushy advertising over the latest viral show out there, but the hype surrounding “Squid Game” is pretty hard to miss, especially when it kept showing up on my timeline with a hoard of memes using snippets from the major scenes. However, there’s only so many times one can see those without experiencing major FOMO. On a whim, I started it late Thursday night, and by Friday afternoon I was reeling after finishing the 9-episode series on Netflix.

The story starts off in South Korea following a middle-aged man by the name of Seong Gi-Hun, a compulsive gambler who has buried himself in a debt so large that he has no hope of crawling himself out of it. At the lowest point in his life, he is approached by a stranger who offers him 100,00 won (Korean currency) if he beats the strange man in a childish game on the sidewalk. They play a few rounds and eventually Gi-Hun wins himself the money. Before the stranger leaves, he explains to Gi-Hun that there is a tournament happening soon where he could win even more money. To a compulsive gambler with debt in the millions, this chance is almost too good to be true and too tempting to resist. Upon entering the tournament with a few hundred other desperate souls in similar situations, he is shocked to find the competitions are all children’s games. But while they may look easy and familiar enough, there is a catch: any player that does not complete or win the game gets killed off.

From the first episode I was sucked right into the dark and dangerous lives of these people as they entered the games and fought for the chance to emerge with nearly 45 billion won. If you were wondering how much that is in U.S dollars, it’s roughly $38 million. While it’s obviously not quite equal in U.S currency, it’s undeniably a hearty sum that would turn anybody’s head, or in this case, roll some heads.

With no chance to survive in the real world, these people quickly realize this tournament is their last chance at survival. The way this show explores how these characters adapted and evolved in response to the pressing impulse to survive blew me away. It showed every facet of human nature and made each character so complex and dynamic that you found yourself sympathizing with them even if you disagreed with their choices. We’re all human, and this show refused to shy away from portraying the darkest, most selfish parts of humanity that we often keep hidden. It was an utterly honest and raw portrayal of human nature, and exposes the lengths average people are willing to go in order to survive and escape from under all their debt.

Not only did this show defy my expectations, but it left me absolutely awestruck after every episode. It pushes you to reflect inward and wonder, if you were in the same position as some of these ordinary, desperate people, would you do the same? With characters to root for and plot twists at nearly every turn, this show will keep you in suspense until the last minute. After doing some research, I’ve learned that many Korean shows comprise of only one season. So while there’s no word yet on “Squid Game” being picked up for another season, the entire show is available on Netflix for a quick 9-hour binge!