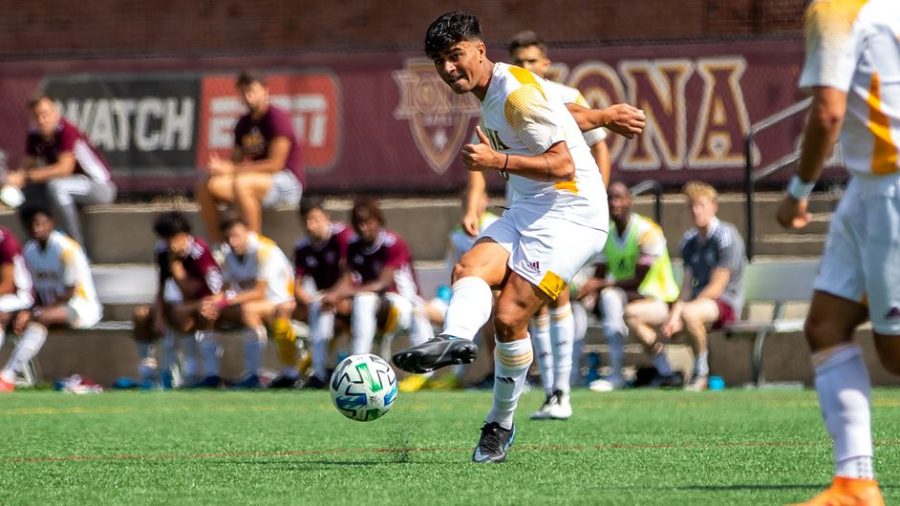 The Gaels haven’t scored five goals in a game since their 5-0 victory over Siena in 2018.

The Iona men’s soccer team went on a three-game winning streak to close out non-conference play, finishing off the span with a 1-0 win against Columbia on Sept. 25.

They were able to beat the New Jersey Institute of Technology Highlanders on the road with a score of 5-2 on Sept. 14. They then took that momentum to beat Sacred Heart at home on Sept. 22 with a score of 2-0. After this home win they went back on the road again on Sept. 25 as they won 1-0 against Columbia.

The first game against NJIT resulted in a win with two goals apiece coming from junior forward Camil Azzam Ruiz and fifth year midfielder Eduardo Calvo-Salinas. Fifth year forward Lenworth Lopez added a score of his own to top off the scoring.

The game against NJIT saw the Gaels put up their biggest offensive performance of the season. The team’s five scores in the game is hard to understate, considering they had scored four goals in their previous four games combined.

Azzam Ruiz and Lopez carried their hot streaks back with them to Mazzella Field and each scored a goal to guide the Gaels to a 2-0 win over Sacred Heart.

They then took their two-game winning streak and looked to make it three when they faced off against Columbia. They were able to get the win with the only goal of the game coming from Alessio Hernandez.

The Iona soccer team is on a nice winning streak while coming together as a team. Iona will look towards their top players to help them for the rest of the season and to try and win the Metro Atlantic Athletic Conference tournament.

Azzam Ruiz, Lopez and Calvo-Salinas have all been important contributors to the team’s success over this span.

This three-game winning streak was very crucial for the team. They will be looking to carry this streak with them into this upcoming MAAC season.

Iona went 2-4-1 in MAAC play last year. Iona ended up losing to Rider 4-1 last year as they were eliminated from the MAAC tournament.

Iona will play in ten games this year against MAAC conference teams. They have already played two of those games, going 0-1-1 in that stretch. Their most recent game resulted in a 0-2 loss to Canisius at home.