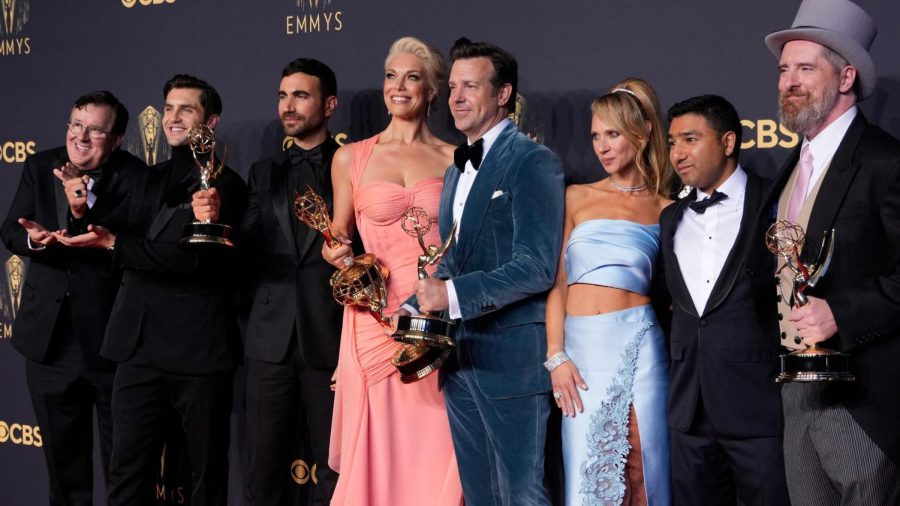 The 73rd Primetime Emmys showcased the best of television right outside of Hollywood on Sept. 1. The event, held live in downtown Los Angeles, returned to in-person capacity after being virtual in 2020 due to COVID-19. The night did not fall short on highlights or history made.

The Apple TV+ comedy “Ted Lasso” was a part of the history made that night, as it became the most nominated freshman comedy series of all time. The show entered the night with 20 nominations, surpassing “Glee,” which previously held the record with 19 nominations in 2010. The critically acclaimed Hulu series “The Handmaid’s Tale” did not capture a single award despite their 21 nominations, making this the biggest Emmys “shut-out” ever.

“The Crown” was the biggest winner of the night as they took home seven Primetime Emmys, as well as an additional four Primetime Creative Arts Emmys, totaling 11 wins. “Ted Lasso’s” night was considered dominant, and rightfully so as the series took home four out of the seven major comedy awards. However, “The Crown’s” dominance was of a higher level as they won all seven major drama awards. Alongside the award for Outstanding Drama Series and the acting awards, the show also took home Outstanding Directing for a Drama Series and Outstanding Writing for a Drama Series. These victories continued the winning streak for “The Crown,” which won ten total Emmy Awards in the previous three years of nominations. Season 5 is coming out Nov. 2022, which has fans and newcomers of the show excited for what’s in store.

Mj Rodriguez of the FX drama series “Pose” became the first transgender person to receive a nomination for a major acting Emmy Award. She was nominated for Outstanding Lead Actress in a Drama Series for her role as Blanca Evangelista on the show. RuPaul took home three Emmys, making his total number of wins 11. This makes RuPaul the most awarded person of color in the history of the Emmys.

Despite the history made, there was still controversy surrounding the show. Nominees of color failed to win most categories, including all 12 acting fields. This is a step back from last year’s show that saw four out of the 12 categories won by nominees of color. Nominees of color made up 44 percent of the acting nominations, a record for the Emmys. The lack of wins led to the hashtag #EmmysSoWhite trending on social media. Diversity is a problem several award shows have experienced through the years, and the Emmys are no exception.

Nonetheless, the 73rd Primetime Emmys still left many television fans excited for the upcoming seasons of their favorite shows, whether they left with an award or not.