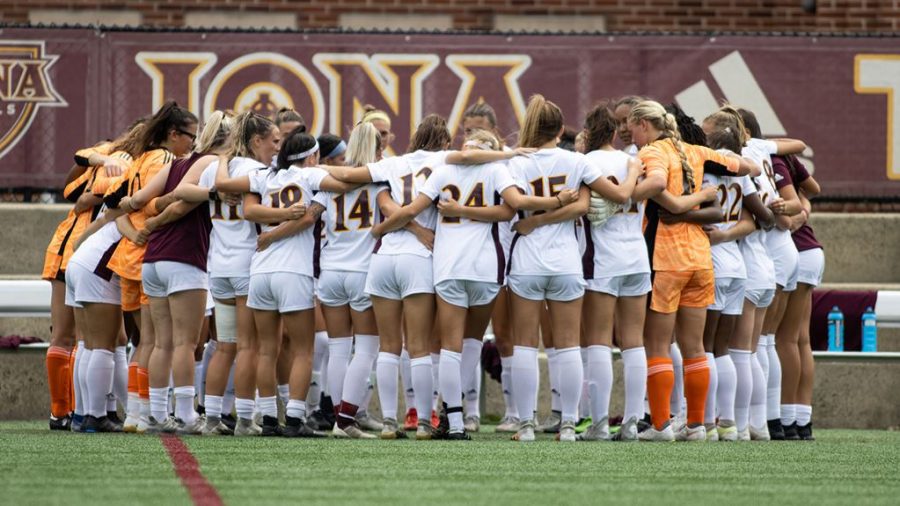 The team has scored more goals in the first four games of the new campaign than it did throughout the shortened 2020-2021 season.

The Iona Gaels women’s soccer team has endured a mixed start to their new campaign, currently holding a split record of 2-2.

The Gaels opened their season with a 5-0 defeat against Boston College at Mazzella Field on Aug. 19. The key area where the Gaels lost the game was in chances created. The team managed just five shots compared to Boston College’s 23. BC also had 11 corners and the Gaels did not have any.

A comeback victory away at Saint Bonaventure followed where the Gaels won 2-1 at Marra Athletics Complex on Aug. 22. Goals either side of the halfway point from senior Faith Preziosi put the Gaels up 2-0 and despite a late push from the opposition, the Gaels’ defense held up and handed them their first win of the season.

Next up for the Gaels was another away trip to Lexington, Virginia where they played the Virginia Military Institute Keydets. The game was a high-scoring affair with the Gaels emerging victorious in a 4-3 win. Freshman Kedarjah Lewis led the way for the Gaels with two goals coupled with a goal apiece from junior Beyonce Williams and sophomore Emily Drake which handed the Gaels their second consecutive win.

Graceann Murphy was also key to the Gaels’ victory against the Keydets, leading the team with three assists. Sophomore Kayla Thomas got the other assist for the Gaels. The main difference in this game for the Gaels was that they managed 21 shots, 11 of which were on target. They also had 11 corners compared to the Keydets’ two.

The Gaels travelled to Baltimore, Maryland for their next game where they played the Loyola Maryland Greyhounds.

The Gaels struggled in this game losing 5-1. Senior Andrea Ferrer scored the only goal for the Gaels, her first of the season, which was assisted by sophomore Alexis Atkinson.

The team’s following home game against Lafayette was cancelled on Thursday due to the flooding that occurred throughout the Iona Campus Wednesday evening.

MAAC conference play for the Gaels will begin on Sept. 18 against Monmouth at Hesse Field.