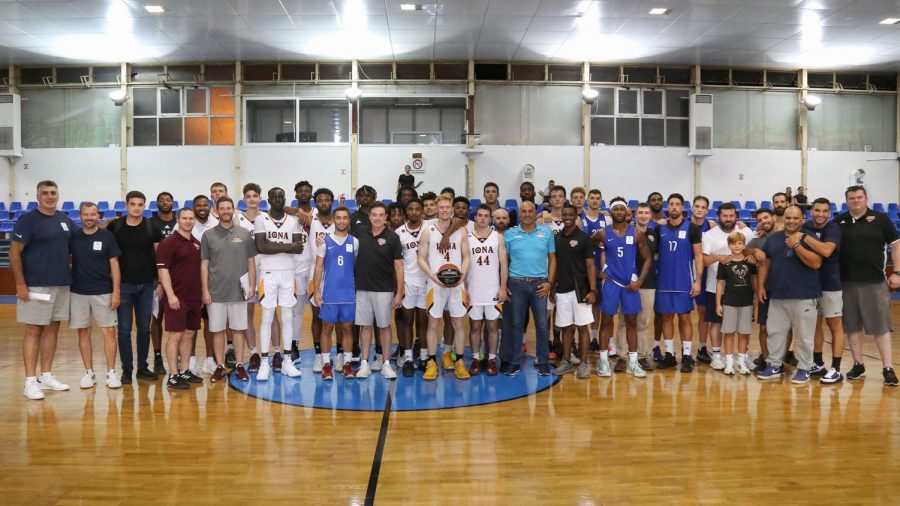 The Iona men’s basketball team completed their 2021 Greece Tour with an 82-70 win over Ionikos Nikaias B.C. on Aug. 27, a trip that included five games against four professional teams in the Greek Basket League.

The Gaels’ defense proved to be the most decisive factor in the contest, as they were able to hold a professional basketball team in Ionikos Nikaias B.C. to just a 32% shooting rate from the field and just 21 % from deep.

Iona’s 11 steals, as well as 18 forced turnovers, further demonstrate how the team’s hustle and pressure prevailed.

Second-year players Nelly Junior Joseph and Ryan Myers both scored 22 points to lead the way for Iona’s offense. The pair set the pace in two very different ways, with Junior Joseph controlling the paint and exploiting Ionikos’ interior defense, while Myers scored from outside with four three-point field goals on 8-18 shooting.

Junior Joseph’s presence in the key was also evident in his game-high 13 rebounds, six of which came on the offensive side of the court, and four blocks.

Fifth-year player Dylan Van Eyck continued his role as a multi-faceted playmaker in head coach Rick Pitino’s game plan, a role which Gaels fans were accustomed to seeing him carry out last season. The forward only converted on 5-13 shots but was able to dish out six assists and grab five boards in the win.

The first quarter of the game saw a lot of scoring and very little defense as both teams were able to get to the line at will. Ionikos capitalized on their free throws, converting on 11-14, but Iona’s effort and energy resulted in nine second chance points that helped them end the quarter down by only two.

Both teams scored 18 points in the second period, but Iona’s defensive adjustments halted the opponent’s offense from the field, limiting them to just 3-13 shooting in the quarter. This trend continued into the second half, where Ionikos was able to score just five points in the third period.

Iona’s sideline was heavily involved in the game from the opening tip as the Nakaias Platonas Indoor Hall echoed with the bench’s shouts and applause. This energy came to a head during the final seconds of the third quarter, when Gael’s defenders shut down the opponents’ possession and forced a shot-clock violation.

Pitino heralded his defense after the game, highlighting the 42 deflections that Iona accumulated.

“Anytime you beat a professional team it’s special,” Pitino said in a postgame interview. “The guys wanted this very badly on defense.”

The win serves as the conclusion to a week of basketball against some of the top teams in the Greek Basket League. Iona battled Panathinaikos B.C. on August 25, and lost by a deficit of 7 to the reigning GBL champions and EuroLeague qualifiers.

The Gaels will have a long layoff to recover from the trip before the team looks forward to its first collegiate preseason contest against Appalachian State on Nov. 9.