“What If…?” creatively spins stories of MCU in animated setting 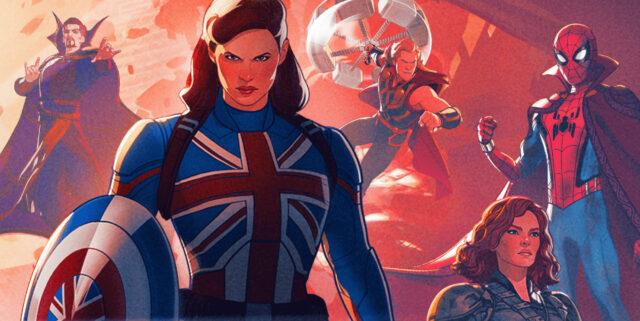 Marvel's What If takes the MCU in fresh new direction.

With the Marvel Cinematic Universe having firmly established a wide array of superheroes and storylines for over a decade, Marvel’s “What If…?” aims to take what audiences know about these characters and turn it on its head. The Disney+ animated series is an anthology of different stories with each episode presenting a different what-if scenario that takes the stories from the MCU in wildly different directions.

The premises of “What If…?’s” episodes all depict unique scenarios such as what would happen if the Avengers died before becoming a team as well as some outlandish ones such as Black Panther taking the place of Star-Lord in “Guardians of the Galaxy.” Seeing familiar characters from across the cast of the MCU be placed in radically different situations is both intriguing and entertaining. The whole series is a fun thought exercise for seeing how one different decision can fundamentally change an entire narrative. With each episode telling its own self-contained story, it’s easy to jump into the show at any point, however, the series does require having seen much of the MCU films prior to fully enjoy the differences it takes with its plotlines.

While the public at large mostly recognizes Marvel superheroes from their MCU film incarnations, “What If…?” uses those films as a launchpad to explore other areas of their characters’ history from the comics they originated in, whether that be through exploring alternative storylines, or incorporating characters that have only been featured in the comics. “What If” uses its premise to explore characters if they were to take drastically different paths in life, and doing so presents fun scenarios such as showing a mellowed-out Thanos that isn’t set on a quest for mass genocide, as well as having thought-provoking character studies such as Dr. Strange abusing his power to manipulate time to cheat death, only to suffer because of it.

Many actors from the MCU films return to reprise their roles through voice acting, although there are some notable and understandable absences such as Robert Downey Jr. and Chris Evans. Despite the initial announcement that “What If…?” would feature these actors returning to their roles, the new voice talents that takes their place do a great job and help give a different take on the characters they play. Marvel’s “What If…?” is also notable for being the last recorded performance of Chadwick Boseman as Black Panther before his passing.

The animation of the show is visually impressive with characters being modeled to resemble their live-action counterparts but in a way that still feels stylized and distinct. “What If…?” uses the benefit of being an animated show to great effect with dynamic fight scenes and visual imagery that would be hard to replicate in a live-action setting. The pacing of the show is fast-paced and while at times that can make it hard to have much interaction with episodes featuring large casts, it’s not as much of an issue for episodes that only focus on a handful of characters.

Marvel’s “What If…?” is a standout feature for Disney+’s original content that embraces the eccentric comic book origins of the massively popular MCU films and uses it to explore different and exciting alternate stories within the Marvel Universe.