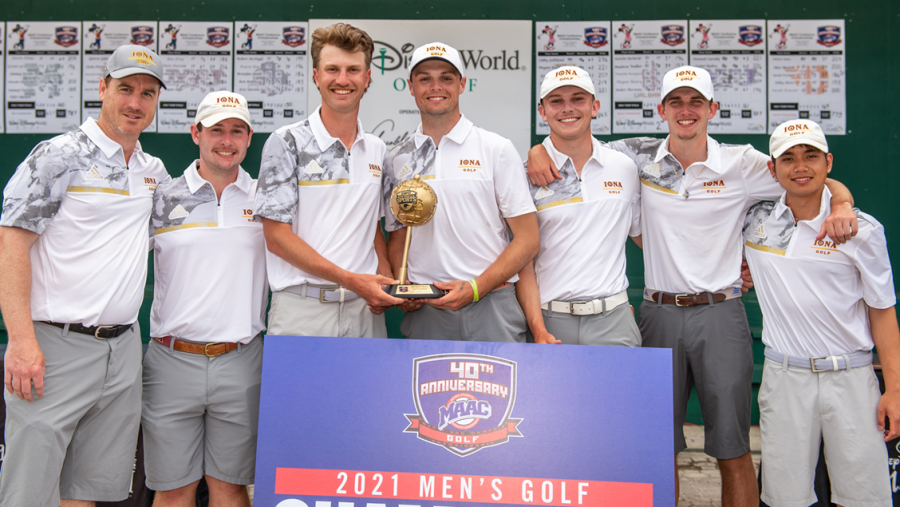 The Iona College golf team won the Metro Atlantic Athletic Conference championships for the third time in a row after nearly a year off the green.

The tournament was able to take place despite the ongoing COVID-19 pandemic. Plans were put into place in the fall to get all of the spring sports together and ready to play during the pandemic with preventative measures put in. These included consistent COVID-19 testing, quarantining from programs if anyone got COVID-19 and working around an almost-week-by-week basis, playing it by ear for each tournament.

April was the month the Gaels needed to get it together, and fast. The March mood followed them into the early days of April, as they finished tied-ninth, tied-eighth, and sixth out of 12 respectively during the three-day Connecticut Cup event.

Iona finally started to build up some momentum, even if it was a little, at the Red Storm Invite, where they finished second of four. It was stopped suddenly the next day, when they played only one other college in St. John’s and fell to the Red Storm. Just three days later, the Gaels finished tied-fifth of eight at the Hartford Tumble Brook Invite.

Momentum started to solidify in the next two events as Iona finished fourth of 11 at the Sacred Heart Spring Invite. Next, at Doc Gimmler, Iona finished tied-second and third of nine respectively over the two-day event.

Come MAAC Championship time, Iona made sure to show up. At the first day of the championship, Iona took first of eight, their first time all season finishing at the top of the list in an event. The second day wasn’t as good, but it was still a quality performance from the Gaels as they finished second. The third day, Iona dotted their I’s and crossed their T’s as they wrapped up their season with a championship-winning performance, finishing first once again and taking home the title of MAAC Champions.

The Gaels find out who they take on in the NCAA Regional on Wednesday, May 5. The selection can be viewed on the Golf Channel.