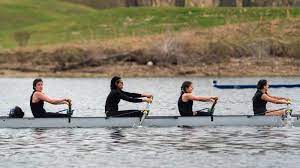 The Iona men’s and women’s rowing season is underway as they look to finish the shortened season on a strong note.

Iona rowing has competed in three races so far this year, the first being against Stockton University at the Intracoastal Waterway Atlantic City Boathouse in New Jersey on April 3.

The Gaels’ women’s team took part in three races in cold conditions and strong winds that day, while the men’s teams competed in two. The races were 1800 meters in distance.

The women’s team found the most success at Stockton in the varsity four race, winning with a time of 7:00.02. The boat was made up of graduate student Juliann LoRusso, junior Jasmin Schons, sophomore Erienne Peters and junior Erin O’Brien. Sophomore Jasmin Ceja-Vega served as the boat’s coxswain.

The Gaels got much-needed time in the water at the Stockton meet, head coach of the women’s team and assistant coach of the men’s team John Boyd said in an interview via phone call. The teams’ lack of access to their boathouse at Glen Island Park in New Rochelle greatly hindered the teams’ in-water training, which usually takes place throughout the fall in preparation for races in the spring.

To make up for this lack of actual rowing, the staff had to find new ways to keep the team  motivated throughout the fall conditioning period, according to Boyd.

“Rowing is a really hard sport,” Boyd said in the interview. “Engagement was something that was high on the priority list.”

One way that the coaches kept the teams busy was by having the men and women train for and run a half-marathon, according to Boyd, who had plenty of praise for the hard work and dedication that his rowers were putting in throughout the adjusted season.

Boyd also highlighted the shift that the men’s program is undergoing, transitioning into becoming a more light-weight team. Although the team is in what he described as “year one” of this transition, the success of the men in the varsity four at Stockton is a testament to this light and fast approach.

The next race of the year for the Gaels was the Sacred Heart Invitational on April 10 on the Housatonic River in Connecticut.

The women’s varsity four won for the second-straight week, coming in at a time of 8:07, ahead of Sacred Heart, the United States Merchant Marine Academy and Fairfield. The women’s varsity eight showed improvement, placing in third with a sub-eight minute finish in the race.

The men’s side only raced in the varsity four event, and they finished in third with a time of 7:07.05.

On Saturday, the team took part in a meet hosted by Manhattan College at New York Racing Association Overpeck Lake Training Center in Ridgefield, NJ. The women’s team raced against the Jaspers, Sacred Heart and Fairfield.

The meet was a 2000-meter race, and the women’s team had a tough day in the water, placing last in both of their events. It was an equally-tough day for the men’s team, but the one bright spot was the performance of the novice four plus, who finished right behind Fairfield’s novice boat.

The team looks forward to their first home meet of the season at Glen Island Park on May 1. Iona will host Manhattan and USMMA for the meet.