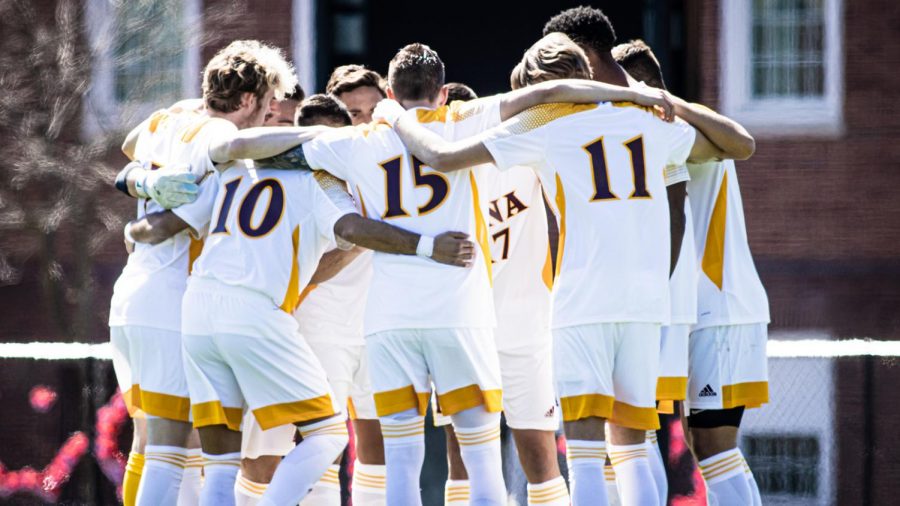 Iona men’s soccer team huddling up during their March 25 game against Manhattan College at Van Cortlandt Park in Riverdale, NY.

The Iona College men’s soccer team capped off their season with a 4-1 loss against Rider in the Metro Atlantic Athletic Conference championships on April 11.

The loss ends their season with a 2-4-1 record. They finished with a .417-win percentage, down from last season’s .650-win percentage. The difference has come for a plethora of reasons, most notably the shortened season brought on by the COVID-19 pandemic.

Since the cancellation versus Marist on April 1, the Gaels went 1-1-1 in the next three games. They won 2-1 against Siena, lost 3-5 against Quinnipiac and, in ironic fashion, tied against Saint Peter’s 1-1 after a double overtime. For context, the Gaels beat Saint Peter’s in overtime to win the MAAC Championship for the first time in the program’s history in the 2019 season.

This final loss to Rider showcased the Gaels’ weakest aspect of their game: their finishing. Taking a look at the record, the only two wins for the Gaels were 2-1 victories, with one of them being in overtime.

On the positive side, the Gaels were able to get a higher shots-on-goal percentage this season with significantly less attempts. In the 2019 season, there were 115 shots in 7 games. This season, there were only 89. The Gaels are doing a great job creating chances in front of the goal as well.

The negative comes with the subsequent results from these games and the shot percentage. Their percentage goes down by 0.038 percent, which may not seem like a lot, but is the difference between above 0.500 and below. The Gaels are capable of peppering the goal with shots time and again. What’s missing is the fact that they haven’t been able to get nearly as many as they’d like in the back of the net.

To be fair, this season’s team is entirely different from the 2019 team. There were 10 changes to the roster, so it’s safe to say the Gaels are trying to do things differently now. Nonetheless, this season was a good way for coach James Hamilton to see the weaknesses he needs to work on with his team and hopefully patch them up by recruiting new players and getting those already on the team to better follow his philosophy come the next season.