Netflix’s ‘Concrete Cowboy’ saddles up and cements itself as an engaging, emotional drama 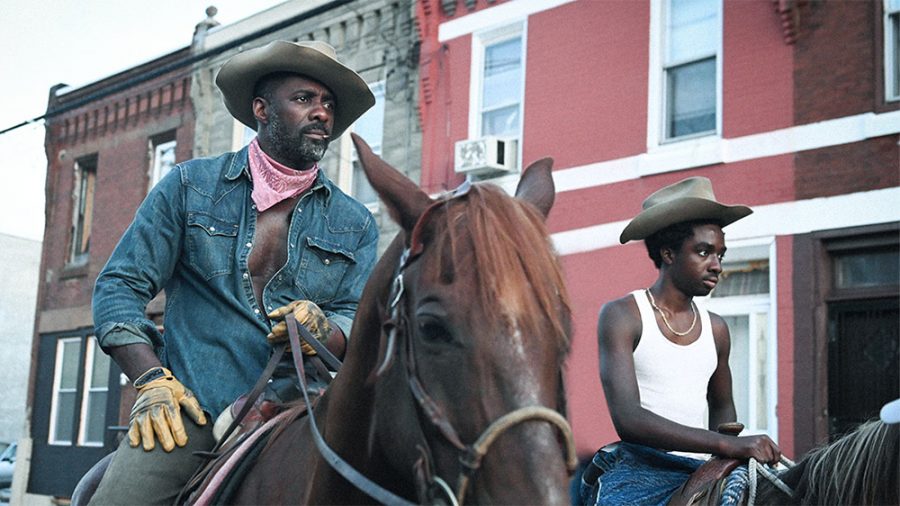 Based on the novel “Ghetto Cowboy” written by Gregory Neri, Netflix’s “Concrete Cowboy” is a thoroughly engaging Western drama that explores a strained family relationship using urban horseback riding as the plot’s foundation. The film is a fictionalization of the real-life Fletcher Street Urban Riding Club in Philadelphia. Several of the film’s actors are actual members of the horse-riding group, and the film helps bring light on the culture that they’ve carried with them.

“Concrete Cowboy” follows 15-year-old Cole (Caleb McLaughlin) after his mother dumps him in Philadelphia to live with his estranged father, Harp (Idris Elba), after  continuously starting fights in school and consequently getting expelled  Harp helps run an urban horse riding club that is at risk of being shut down by the city in order to use the land for real estate. Upset with his father’s abandonment of him, Cole joins his friend Smush (Jharrel Jerome) but throughout the film Cole finds himself having to choose between staying with his father’s ranch or dangerously risking his life on the streets with Smush.

“Concrete Cowboy” handles the conflict of its plot’s family issues extremely well, showing faults with how both Cole and Harp handle the situation. The film manages to capture the hurt both characters feel and show how serious and sad having an estranged father can be. This tension ultimately becomes rewarding as Cole slowly starts to find his place within the horse riding club that his father owns.

The story uses its cowboy setting not only to develop its characters but also explore the Black roots of one of the most uniquely American cultural aspects. The film emphasizes how cowboys and horseback riding were predominantly Black–dominated throughout history and that the club exists to help preserve the history and their culture. The use of live horses throughout the film is also impressive and all of the actors work extremely well with all the live animals. The film’s cinematography helps elevate this as well and brings out the uniquely urban feeling of the ranch as well as the film’s darker moments.

“Concrete Cowboy” doesn’t shy away from its most serious aspects, particularly when it comes to Cole’s dilemma with Smush. The film emphasizes the severity of the situation and how dangerous Smush’s life on the streets is, leading to some incredibly emotional moments during the film. The film is emotionally engaging throughout most of its nearly 2-hour runtime, however, during the movie’s more climactic moments, it becomes difficult to take it seriously due to certain characters not facing consequences that they should for their actions.

“Concrete Cowboy” is an entertainingly emotional drama with a unique, horse riding premise that it fully takes advantage of in order to tell a compelling story.