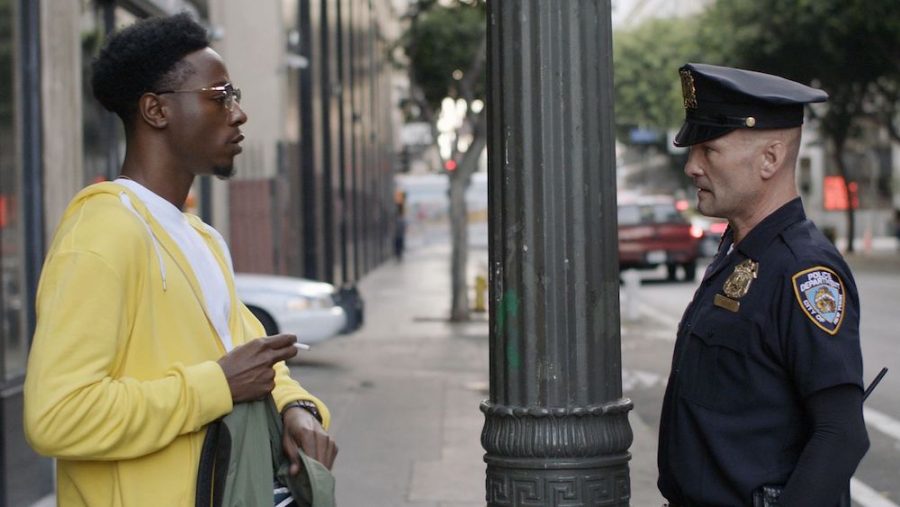 Premiering on Netflix this month after its 2020 release, “Two Distant Strangers” is an incredibly unique and well-directed short film that is already  an Oscar nominee. Within its nearly thirty-minute runtime, the film uses its time-loop premise to examine the incredibly harrowing and important issue of police brutality within America.

The plot centers around young graphic designer Carter James (Jo-Vaughn Virginie Scott) who after staying the night with a friend, runs into a dangerous encounter with NYPD Officer Merk (Andrew Howard) in which he loses his life. However, Carter wakes up back at his friend’s home immediately afterward and finds that time has reversed itself. Throughout the film, Carter repeatedly attempts to relive the scenario in different ways and tries to return home but continuously loses his life to the same police officer.

“Two Distant Strangers” uses its time loop premise extremely effectively and feels like an episode straight out of “The Twilight Zone.” The great acting from the protagonist also brings to life the desperation of the situation. No matter what he does differently, the situation always ends  the same way, and you can visibly see through Jo-Vaughn’s performance how much of a mental and emotional toll it has on him. Even with the supernatural time element of the film, “Two Distant Strangers’” depiction of police brutality is unsparingly realistic and it takes its subject matter incredibly seriously, so much so that the film may be triggering to some. However, the short film smartly dissects and analyzes the topic at hand, and its message of trying to come to an understanding and talk to one another as human beings to acknowledge and overcome racial inequality is powerful.

The cinematography helps emphasize the direness of the protagonist’s situation. Given the length of the film, every shot becomes crucially important, and the film capitalizes with this by giving everything a reason to be shown. Miniscule details that the film subtly highlights during conversations and in the background hint towards crucial moments in each scene as the film goes on. The film also uses this technique during specific points to give a voice to several notable victims of police brutality by placing their names in subtle but natural places within different scenes.

“Two Distant Strangers” is memorable not just for its unique narrative premise but also for how it puts into perspective one of the most troubling social issues within our nation today.