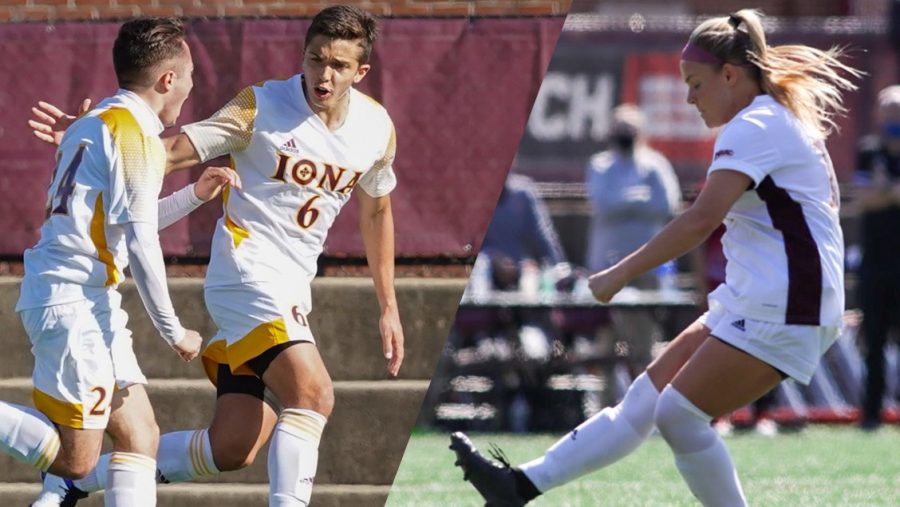 Both teams have only two more matches before championship time.

The Iona College men’s and women’s soccer teams started off their seasons as they tackle a short but meaningful schedule.

The men’s team is looking to defend their Metro Atlantic Athletic Conference title that they won in the 2019-20 season. It’s the program’s first-ever MAAC championship title. It’s a bit different now though, with a total of 10 changes in the roster compared to that title-winning team.

The season is set to have only seven games, compared to the 2019-20 season’s 20 MAAC games and 1 NCAA game. Additionally, one of these games has already been postponed due to COVID-19.

Nonetheless, the Gaels have started off with an even 2-2 record. All games have been within a one-goal difference.

The first was a 0-1 loss versus Rider. It was an attack-heavy first half, but it left the teams at 0-0. Come early second half, Rider was able to put a free kick past goalkeeper and redshirt sophomore Gabriel Cinanni. Iona wouldn’t be able to get it into Rider’s net for the rest of the half.

Three days later the Gaels hosted the Monmouth Hawks. It marked the first win of the season, as they sent the Hawks flying home in a tight overtime match that ended 2-1. Monmouth started off the game strong, scoring an early goal to take a 1-0 lead going into the second half. Iona brought it back in the second, causing an overtime by the end of the second. The winning goal was a long cross into the box by freshman midfielder Daniel Curmi followed by a hard header into the net by senior forward Lenworth Lopez.

In their third game, Iona visited the Manhattan College Jaspers at Gaelic Park. It was a matter of early offense followed by defense for the rest of the game. After a 17th minute goal by Manhattan, it was just a matter of keeping a clean sheet and not allowed Iona to get anywhere near the goal. Their mission succeeded and the Gaels fell to the Jaspers 1-0.

The Gaels came up against Siena with their focus on scoring. Iona managed to get a total 15 shots, eight of those being on goal. The Saints only managed a total of three, with two being on target. The peppering of shots worked for the Gaels as they managed to bring home a 2-1 victory. This season’s situation is similar for the women’s team, including the postponement. It’s been a struggle to find the back of the net for the lady Gaels. They’ve only scored a total of four goals in five games.

The first game exposed Iona’s defense when they lost to Monmouth 0-3. The Hawks battered Iona’s net with 18 shots, seven being on target. Iona was only able to save four of the shots, compared to Monmouth’s clean sheet. Fouls were rampant as well, with a total 21 fouls throughout the game, shared near-evenly between the two.

A glimmer of hope came in the next game against Rider. The stats were almost even across the board, with seven shots on target for both teams, though Iona managed to shoot 17 times compared to Rider’s 14. Saves were at six-a-piece and Iona had six corners to Rider’s four. The Gaels were rough on the pitch as well, committing 14 fouls and receiving a yellow card. In the end though, it ended up being a tight double-overtime, where the Gaels were able to scrape up a point to take home as they managed to secure a tie against the Broncs.

The glimmer faded a bit though, as their next two games against Siena and Canisius would finish 0-6 and 0-2 respectively. Iona would take a total of 29 shots between the two games, 17 of those being on target. In comparison, Iona got only 11 shots off, eight of them being on target.

Come April 2, the Gaels would finally gain their first win of the season against Saint Peter’s. In a tight match that headed to overtime, the Peacocks gained the lead in the first half, leaving Iona to face a 2-0 deficit. They wouldn’t let the hill in front of them discourage them though. The Gaels managed to get it into Saint Peter’s net twice more in the second half, leading to a 2-2 overtime. Finally, just over four minutes into overtime, sophomore forward Kiera Haggerty curled it in straight from a corner, giving Iona their first win of the season.

The men’s team takes on Saint Peter’s next on April 8. The women’s side finishes their season on April 6 against Manhattan.