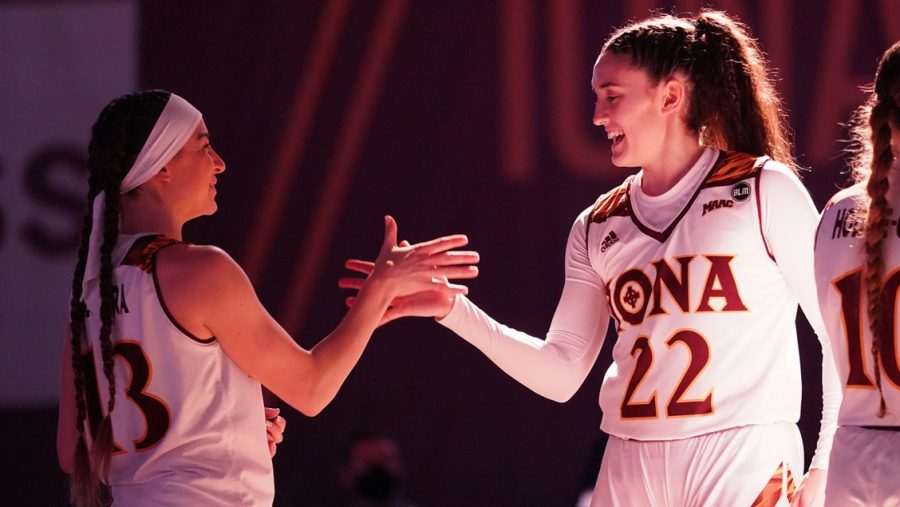 The Iona College women’s basketball team takes on Saint Peter’s in the quarterfinals of the Metro Atlantic Athletic Conference.

The Iona College women’s basketball regular season came to an end on Friday with a 65-51 win against Monmouth. The team ends their season 6-8 overall, 5-6 in the Metro Atlantic Athletic Conference.

The Gaels’ season was one of the high highs and low lows. They had a rough start to the season against Army and Bryant University outside of the MAAC and Saint Peter’s in the MAAC. Come midseason, Iona found their way against Rider and Sacred Heart in the MAAC, as well as Niagara in one of their two games.

Since their last win against Niagara on Jan. 1, they had a four-game losing streak. The Gaels are going into the MAAC Championships placed sixth in the MAAC.

The Gaels struggled with gaining a lead early on. When they achieved that lead, they struggled with keeping it. In the early season, scoring was a struggle for Iona. There were many quarters where the Gaels weren’t able to break single digits, while their opponents have consistently scored in the higher teens against them per quarter.

Come midseason, late-game surges of high-scoring play boosted the Gaels to a four-game win streak. This surge of high scoring initially came in the first match against Rider on Dec. 18 in their 56-41 win against the Broncs. The Gaels scored 24 points in the second quarter alone in this game, which set up their lead for the remainder of the match. In their next game versus Rider, it was more about consistent scoring, something Iona struggled with for a good part of their season.

Fourth-quarter blowouts were the name of the game for Iona’s next two matches against Sacred Heart and Niagara, where they scored 29 and 25 points respectively in the last quarter of the game. The game against Sacred Heart, while not in the MAAC, helped them set up for the same game performance against their league rivals Niagara to help them gain their much-needed third win of the season.

The late-game surge wasn’t enough in the Gaels’ second meeting with the Purple Eagles though, as Niagara beat them at their own game, scoring 30 to Iona’s 26 in the final quarter. This pattern of high-scoring later on would prove to be a trend as the Gaels would go on to lose three more games. Iona achieved good leads during these games but couldn’t hold on to them.

Come to their last two games against Monmouth, Iona pulled off a couple of wins. Early scoring in both games led to a sizeable lead the Hawks had trouble closing. With consistent scoring, the Gaels managed to keep the gap and coast their way to two victories going into the MAAC Championships.

Top performers this season include junior Juana Camilion with 163 points and 60 rebounds, senior Olivia Vezaldenos with 130 points and a .340 3-point percentage, and redshirt-sophomore Paulla Weekes with 86 points and 66 rebounds.

The Gaels look to prove themselves at the MAAC Championships starting Thursday when they take on Saint Peter’s in Atlantic City. Fans can watch the games live on ESPN+.