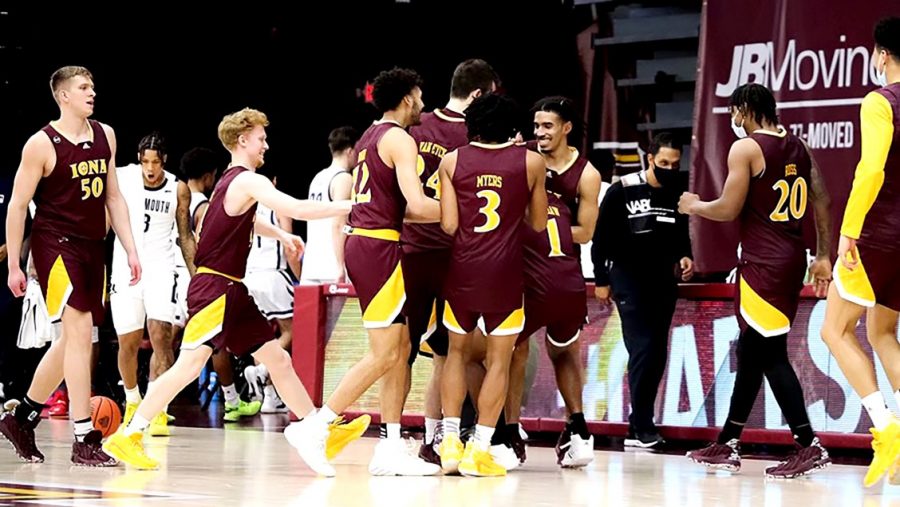 The Iona College men’s basketball team takes on Quinnipiac in the first round of the Metro Atlantic Athletic Conference // Photo courtesy of icgaels.com.

The Iona College men’s basketball team ended their season prematurely with an 8-5 overall record and a 6-3 record in the Metro Atlantic Athletic Conference.

The season started with a lot of buzz around Iona ever since head coach Rick Pitino was signed on to the team. News outlets like ESPN were itching to see how Pitino would do back in the college basketball scene, at a smaller college like Iona nonetheless, at least relative to his history.

Critics were surprised to see Pitino lose his first match against Seton Hall, 64-86. This came after months of preparation and planning from Pitino, plus the massive number of signings the veteran made to build a team around his philosophy.

The next game faredfaired well for the Gaels as they won 82-74 against Hofstra. Pitino was finally able to show how he wanted his team to play, starting off strong and finishing even stronger in the second half.

Pitino and the Gaels tried that same playstyle against Morgan State, but they were outplayed at their own game as the Bears took the win 83-72. It was the last game the Gaels could play before the MAAC started up.

In the first official games of the season, the Gaels started off with a doubleheader against Fairfield, winning one in dominating fashion and losing the other in a closer battle between the two rivals. It was another story of keeping the momentum for the Gaels in the first game, winning 70-42, but Fairfield came out on fire in the first half come the second game, outscoring Iona 36-23. The Gaels couldn’t recover from this early beating and ended up losing the game 52-67.

Next up came another doubleheader vs. Rider, where the Gaels won both close games 70-56 and 72-64 respectively. It was another test of keeping the attack up during both of these games, a problem the 2019-20 Gaels had trouble with.

In their final game of 2020, the Gaels brought home the win against Coppin State in another wide-margin victory of 85-65. Iona was on a roll with their play and momentum when news came of a positive COVID-19 case amongst the Tier 1 staff for the men’s basketball team. This led to a 51-day break, the longest in NCAA Division 1 this season.

Iona came back after the extended break to perform in an announcing manner, winning 85-67 against their longtime rivals Manhattan. It wasn’t the same story the next day though, as they dropped a game to the Jaspers 70-77, ending the four-game winning streak.

The problems in defense reared their head when the Gaels lost 74-70 against Quinnipiac, a game they kept the lead in for most of the time. Late second-half fouls led to Quinnipiac securing the win in the final minutes of the game.

Iona made sure to fix their mistakes come their double header against Monmouth, winning both bouts against the Hawks 91-86 and 88-65 respectively.

The Gaels were just about to get into their winning ways again when another positive COVID-19 test resulted in the cancellation of the rest of the regular season for Iona.

Iona looks to prove themselves Tuesday at the beginning of the MAAC Championships in Atlantic City, N.J., scheduled to start at 5 p.m.