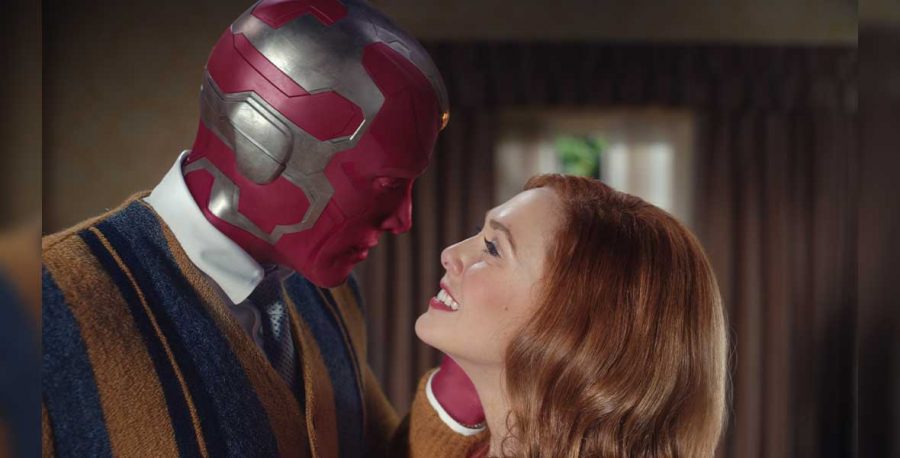 After almost 2 years of waiting, the MCU has finally returned and has created a whole new format with “WandaVision,” the new series streaming weekly on Disney+.

“WandaVision” definitely doesn’t have Marvel’s traditional style of all-around action sequences, but it creates a new dimension of speculation and wonder.  Although it’s different, it leaves the audience with an experience of wanting more answers. Some people may find it too complicated or ridiculous to really enjoy it. However, one of the most enjoyable aspects about “WandaVision” is how most of the series is surrounded by a big mystery.

The premise of the show takes place after the events of “Avengers: Endgame,” and Wanda and Vision are happily married and living in suburbia. However, not everything is what it seems as their normal life seems to be taking on the form of a TV sitcom, changing and adapting by the decade.

With its first few episodes, it’s much better than other shows, but far from perfect. The dialogue can be a little slow but it makes up for it in entertainment with two great actors, Elizabeth Olsen and Paul Bettany, who take the stage once again to play Wanda and Vision. However, the twist of the two character’s marriage convinces the audience of their wonderful chemistry and propels the show forward to greater heights.

Each new episode features a generalized overview of popular television shows from a featured decade. The show even re-creates sets and concept art from shows like “Dick Van Dyke,” “I Love Lucy,” and “I Dream of Jeannie.” While it’s enjoyable to see them play on the time period and genres, it quickly morphs and reveals some of the show’s considerable charms, which are slow to appear but welcome when they do. The overriding cheekiness of the show-within-a-show format makes an initial commitment to playfulness, but like “The Truman Show” or “Pleasantville,” cracks start to show in the squeaky-clean firmament of their carefully-curated world.

“WandaVision” gives Disney the opportunity to use its expansive universe to actually try new things, rather than just grafting shades of other film genres onto existing action blockbuster formulas. It’s theoretically fascinating and, in practice, a unique experience.