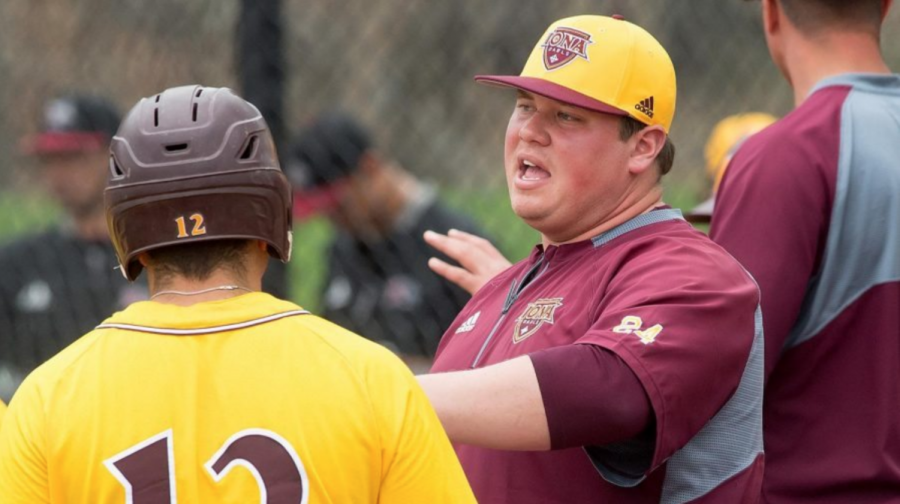 Paul Panik joined the Gaels in 2018, with his second season being cut short by the coronavirus pandemic. // Photo courtesy of icgaels.com

Iona College men’s baseball coach Paul Panik grew up in a home surrounded by baseball. He and his brother, Toronto Blue Jays second baseman Joe Panik, would come home after school from basketball or football practice and wait for their father to come home. When he did, their father would pick up a baseball, bat and mitt and go out to play some baseball.

Paul and Joe’s mother wasn’t left out either. She would join the guys and play some baseball as well.

“It was a whole family event,” Paul said via phone call. “Baseball was kind of a full family thing, it wasn’t just like ‘Oh, dad’s special thing with the boys,’ it was, like, mom was there with us every step of the way too.”

It’s not all fun and games with a baseball-oriented family, though. A family invested in baseball means a family with plenty of opinions on your play. Paul’s father, whose name is also Paul, would show up at the brothers’ games after work, and if they played poorly, they would get what they coined the PGA, or the post-game analysis from their father.

“If you had a bad game, you tried to ride home with mom,” Paul said. “[We would] try to at least put it off for a little bit.”

The environment the Panik family made for their children helped them develop not just as players but also as young men as they grew up throughout the years. The criticism was always there, but not without the love and compassion they showed for their kids, according to Paul.

As the Panik brothers have grown and advanced in their careers, their relationship has stayed quite close. They’ve been able to see each other’s careers grow in different ways.

“We’re almost running parallel, we’re both running our careers, but…his is more of a sprint, mine is more of a marathon,” Paul said. “I think just having each other to…bounce ideas off each other and just talk about the game, what I’ve always said is two minds are better than one.”

The advice Joe gives to Paul has helped Paul grow as a coach and vice-versa as well, though Paul usually gives advice only when asked. The brothers always talk baseball with each other and are invested in each other’s careers. One of the major things Joe has told Paul is “Never forget how hard it was to play the game.” Paul has made sure to keep that in mind when coaching the Gaels.

“That was something he told me one of his first couple of years in pro baseball,” Paul said. “Some coaches don’t remember how hard it actually is. So for me, it’s like… ‘Here’s what I want you to do but I understand why you might be struggling,’ instead of saying ‘Back in the day when I did this…’”

Having a professional baseball player as a brother hadn’t really hit Paul until the 2014 World Series, where Joe won with the San Francisco Giants in Game 7 against the Kansas City Royals. Things really changed then because Paul realized a lot of people were looking up to him as a person, not just as a player.

Paul explained the feeling of watching the Yankees, his boyhood favorite team, winning the World Series and being happy that the players he looked up to won, then watching his brother do the same. He spoke of Bryce Plourde’s (son of women’s soccer coach Todd Plourde) love for Joe and how it’s very similar to how he loved his favorite players growing up.

“He [Bryce] wears number two for Joe,” Paul said. “Todd told me a story the other day that a kid on his team asked ‘Oh, you have the number two for Derek Jeter?’ and Bryce got mad and said ‘No it’s for Joe Panik,’ and the kid looked at him like he had eight heads.”

Joe pays attention to Paul’s career just as much. During spring training, Joe will have the notifications about Iona ready on his phone and will watch the games, according to Paul. He would call their parents and complain about their play if they played bad games as well.

The Gaels are getting set for their upcoming season with 19 new additions to the team, including 12 freshmen. Last season, the team was about to have a breakthrough to perform well, according to Paul. All that momentum was stopped by the coronavirus pandemic, but Paul hopes to bring the team back to that point and further beyond.

Earlier in the season, an unbalanced team caused the Gaels to suffer some bad losses, but after a bad 0-3 series loss to Fordham, everything started to come together, Paul said. It’ll be tough to get the team back to the quality it was after the Fordham game.

Besides winning the Metro Atlantic Athletic Conference title and advancing to the NCAA regional championship, Paul hopes that his team will enjoy playing baseball out there on the field. He feels that a love for the game will help the players fight through any rough patches and come out better on top.

The MAAC hasn’t made a statement on whether spring sports will play yet.