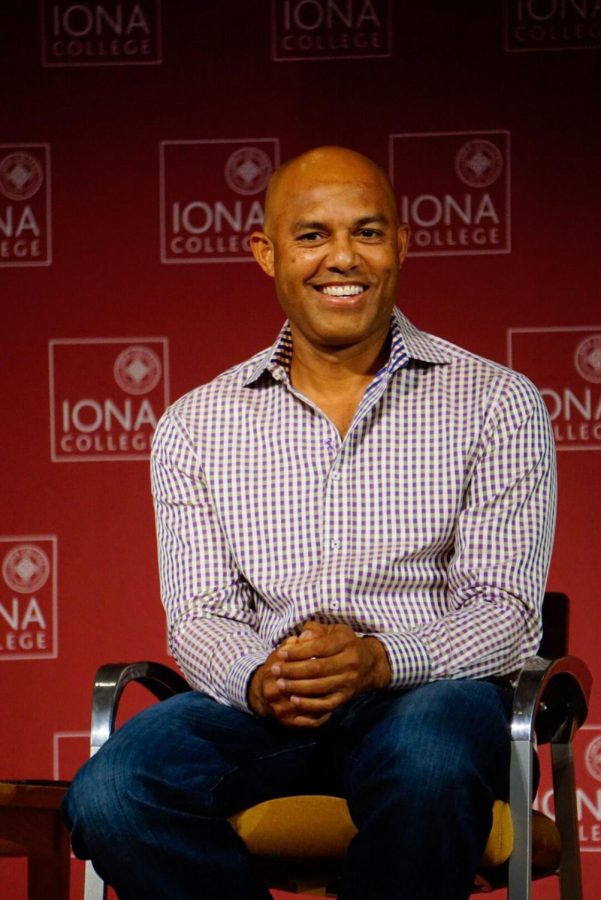 Mariano Rivera visited Iona College in 2017 to talk about how religion played a strong role in his baseball career.

Former New York Yankees closer and all-time saves leader Mariano Rivera became the first player in MLB history to be unanimously voted into the Hall of Fame on Jan. 22.

Rivera received the one call baseball players dream of. He picked up his phone and the voice on the other side told him he had been elected into the Baseball Hall of Fame Class of 2019 by the Baseball Writers’ Association of America.

He was also told he was the first player to ever be unanimously voted into baseball’s most pristine establishment.

Rivera has broken barriers in his baseball career, as he was the anchor to five World Series winning Yankees teams, a 13-time All-Star, a World Series MVP, All-Star Game MVP and ALCS MVP. He was also awarded the Rolaids Relief Man Award for the American League five times, which recognized the league’s best relief pitcher for that given season.

The best part about Rivera’ story is the fact that he was barely a prospect. He had to try out for the club, he didn’t break into the majors until he was 25 -years  old, and he didn’t become a full-time closer until 27.

Rivera would go on to break the record for most games finished with 952 and shatter the all-time saves record, walking away from the game with 652 saves under his belt.

In the postseason, Rivera went 8-1 with a .70 ERA and 42 saves in 141.0 innings pitched. He was unhittable, and his dominance will forever be attributed to the pitch he unintentionally discovered: the cutter.

Deemed one of the nastiest and most iconic pitches in baseball, Rivera shattered the bats of many players with that cutter. Everyone knew he was going to throw it and hitters still couldn’t hit it.

New York Yankees legends have become entrenched within the Ionae College community. However, no other former Yankee has found himself giving back to the school other than Rivera.

Rivera’s oldest son, Mariano Rivera III, made a name for himself as a pitcher for Iona’s baseball team. He pitched for three seasons for the Gaels, where he went 8-17 with a 4.52 ERA. However, he had a tremendous 2015 campaign where he had a 2.65 ERA with 113 punch outs over 85 innings of work.

Rivera has since come to Iona on a few occasions to discuss his religion and how it impacted both his life and his illustrious baseball career in the Bronx. Refugio De Esperanza–a church that the Rivera family rescued and renovated–sits minutes away from Iona’s campus.

This summer, Rivera will join former teammate Mike Mussina, slugging designated hitter Edgar Martinez, Harold Baines and fellow closer Lee Smith up in Cooperstown, New York, where he will be enshrined in front of what will likely be a packed field full of family, friends and fans.