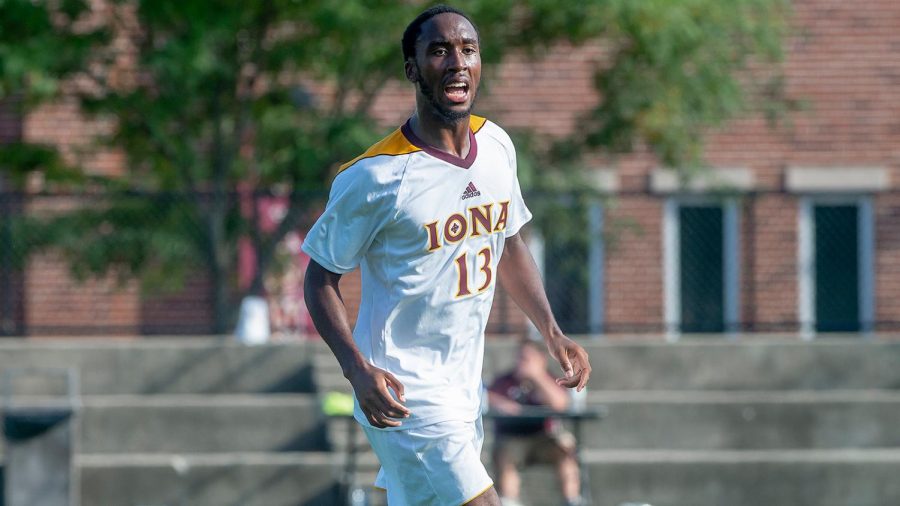 Senior Lenworth Lopez is a criminal justice major and has been on the team since his freshman year. Photo courtesy of icgaels.com.

The Iona community has been active in the movement around the nation, including holding our own peaceful protest over the summer. Students gathered to march against systemic injustice down North avenue near  the New Rochelle Police Department and back.

The athletics community aims to do its part in spreading the message of BLM as well. Senior men’s soccer player Josh Plimpton hopes to send the message to the community that racial injustice is unacceptable.

“Racially targeted systems, they’re just not acceptable,” Plimpton said via Zoom video call. “We see them throughout our entire lives. They can be in school systems, job opportunities, housing, healthcare and most notably is incarceration.”

The BLM movement has been discussed throughout the soccer team, according to Plimpton. The team has had multiple calls, texts and emails about the issue. Plimpton himself, a white male, is quick to ask questions to those who aren’t white on his team about what he can do to better understand.

“I don’t how it feels,” Plimpton said in regard to experiencing racism. “I didn’t go through those challenges, so I’m not afraid to ask others on the team or others in the community what it’s like, so that way I can help support and help go inform others.”

The Iona community is responsible for the neighborhood around it and should help lift the community, especially if it can do so, according to Plimpton. Plimpton hopes programs can be set up between adjacent neighborhoods to introduce the youth to the sport, to expose them to a healthy environment and get to know people from different backgrounds.

Sports is also one of the best ways to send a message across. This is evident with the way Colin Kaepernick used his platform to spread the message that racial profiling and injustice with law enforcement needed to stop. It’s evident that the way the NBA spreads the message of BLM, most notably, and recently, with LeBron James and the Lakers’ “Make America Arrest The Cops Who Killed Breonna Taylor” hats that were purposefully made to look like the well-known “Make America Great Again” hats worn by president Donald Trump supporters across the nation.

Even at the collegiate level, the Gaels were wondering how they could help spread the message of BLM. Ideas came up of wearing black armbands, wearing shirts that said Black Lives Matter on them during warm-ups and kneeling during the national anthem, according to senior and men’s soccer player Lenworth Lopez.

Lopez, a Black male, says he’s felt this movement on a very personal level. Both the cases of Ahmaud Arbery, a Black male who was killed while going for a jog, and Floyd. Arbery’s case hit close to home.

“Arbery went jogging,” Lopez said via Zoom video call. “I’m an athlete, I play soccer, I can go jogging anywhere. I can go visit my aunt, who lives in Florida and I say ‘You know what? I’m going to go jog,’ and I get shot because I’m colored.”

Likewise, after seeing what had happened to Floyd, even when he was on the floor with handcuffs, Lopez felt horrified and angered at what he’d seen.

“It touched me a lot,” Lopez said. “I’ve witnessed racism too, where it was on the soccer field. I’ve been called the n-word, I’ve been spit at, I’ve been called a monkey, and, you know, I’ve been taught from a young age that you ignore that, those are just words.”

Despite being brought up to be the better man and ignore such words, Lopez admits it’s been hard to not to anything about it.

Lopez carries that philosophy with him today, treating everyone as he would like to be treated – with respect.

At the end of the day, though, athletes are paid to play the sport they play, not to get a message across, Lopez says.

Athletes shouldn’t be judged and it shouldn’t be assumed that they’re against a movement because they don’t come out and say something, according to Lopez.

This isn’t to say Lopez wants to see the movement pass away like many of the trends that come and go in today’s age. BLM is a movement that needs to be continuously pushed forward until the systems that cause these injustices are changed for the better.

“I want this to continue to grow and to get stronger and really put out a message that we’re not saying that only Black lives matter,” Lopez said. “We’re saying that, of course, all lives matter but we have to put an emphasis on Black people’s lives because to other people, it doesn’t seem important because…people who are innocent are losing their lives.”